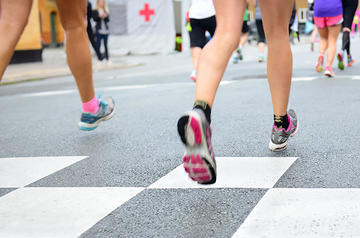 Speed counts! Even the fastest women out there work hard to get themselves to run faster. We asked female athletes who clock some serious speed on the track and on the soccer field for their best speed-training workouts. Here, speedsters Natasha Kai, Deborah DiCrescenzo and Leslie Osborne share their most effective workouts so you can break your own personal record, too.

How I Run Faster: Soccer Star Natasha Kai
"Speed—if you're not born with it, it's not gonna happen overnight," says Natasha, who has sped her way through the US Olympic team in 2008, the 2007 World Cup team, and is currently on the Sky Blue FC team. "And some days you're going to feel like you're not getting faster. But you're the only person who can dictate your success. You're going to have to run that extra mile or run those extra couple sprints to become faster." Go for it with her top speed workouts:

Favorite Speed Training Workout #1: Cones
•Set up five cones five yards apart so that you have one at 5-, 10-, 15-, 20-, and 25-yard marks.
•Sprint to the 5-yard mark, then back to start.
•Next, make it to the 10-yard mark and back. Repeat with each mark until you've made it back to the start after the 25.
Natasha does five sets of these sprints, aiming to finish each set in 30 seconds, and giving herself a mini break between each one. "You basically do 30 seconds on, 30 seconds off," she says.

Favorite Speed Training Workout #2: Treadmill Intervals
"I run at speed 10 at an incline of 1.5 or 2.0, sprint for 30 or 45 seconds, and then jump off," Natasha says. "So if you run for 30 seconds, you'll rest for 30 seconds. Do 10 straight of those, take a 2-minute break, and then jump on and do 10 more." Work your way up to three sets of 10. Once you notice a difference in your speed and feel the difficulty level waning, increase the speed and incline to make sure you're still pushing yourself.

Unrelated, but Really Interesting Fact about Natasha
The PUMA-sponsored star is known for her ink, and was even featured on a segment of L.A. Ink adding another tat after the U.S. Women's team won the 2008 Olympic Gold. When we spoke to her for this interview, she was fresh from getting her 39th!

How I Run Faster: Steeplechaser Delilah DiCrescenzo
Delilah is one of the top women in steeplechase—one of the Olympics' most challenging events—and she's training for the 2012 games. Steeplechase is a 3000-meter sprint, and if that's not tough enough, there are obstacles, including a water jump, thrown in. Here's what she does to get fast—and stay that way:

Favorite Speed Training Workout #1: 200 Meter Endurance Intervals
On a standard track, alternate between running at your top speed for half the track and taking the second half at a slower pace. Repeating throughout your run. If you're not on a track, do this at 200-meter intervals wherever you run. "If you continue with a routine like that, you'll notice maybe a couple of weeks down the line that you're running the faster portions a little quicker, and maybe requiring a little less rest on the slower portion," says Delilah.

Favorite Speed Training Workout #2: Hill Drills
Find a hill with a gentle gradient. Run uphill for 30 to 40 seconds at 90 percent of your maximum effort, then take a slow jog back downhill for recovery. Repeat five to six times.

Favorite Workout #3: Yoga
Not for speed, but it's important! Long-distance runners tend to lose their flexibility due to the limited range of motion. So this PUMA-sponsored athlete does Vinyasa yoga. "I stay away from hot yoga and things that are too athletic because my one goal is to exit there not feeling exhausted, but to feel like I got a good stretch in."

Unrelated, but Really Interesting Fact about Delilah
After being introduced to Delilah by a mutual friend, Plain White T's frontman Tom Higgenson was smitten and wrote the song "Hey There, Delilah." It ranked No. 1 on the Billboard Hot 100 in July 2007 and was nominated for a Grammy.

How I Run Faster: Soccer Star Leslie Osborne
Getting faster isn't very helpful if you get injured along the way. Leslie, co-captain of the WPS Boston Breakers and a member of the U.S. women's national soccer team, has learned to train smart. At age 27, Leslie has already had surgeries on both of her ankles and one of her knees—a torn ACL kept her from playing in the 2008 Olympics even though she had made the team. "I have to be smart now," says this PUMA athlete. "I do interval workouts on the elliptical. Spinning classes are great for me because it's not pounding and I can get my heart rate up and can fatigue my muscles just like I do in soccer." Of course, she does speed drills, too. Her favorites:

Favorite Speed Training Workout #1: 300 Yard Shuttles
Leslie's high school coaches made her do 300 Yard Shuttles to increase her speed. "I still do those today because I love them, but I hate them," she says. To do: Set up two cones or markers 25 yards apart from each other. Sprint back and forth a total of six times. Leslie does her shuttles in less than a minute!

Favorite Speed Training Workout #2: Stay on the Ball
Under the tutelage of a private trainer she saw in Germany for five months during the off-season, Leslie learned to love a few "untraditional" exercises that targeted both her speed and her reaction time. "He would drop a tennis ball and I would have to get to the ball before it bounced twice," she says. Get a friend in on the action and take turns being the ball handler to help push each other for a deeper workout.

Unrelated, but Really Interesting Fact about Leslie
"When I was around 13 or 14, my dad and mom just wanted me to focus on a certain sport because it was hard for them to drive me everywhere," she says. "So out of a hat I chose soccer. My mom and dad still joke around to this day that I would have been better at tennis."