Garner's workouts get "pretty advanced" and incorporate dance, plyometric exercises, and strength training, according to her trainer.

In case you missed it, Jennifer Garner made an appearance on her trainer Beth Nicely's Instagram in a video showcasing the pair's fancy footwork — and it's fairly mesmerizing. In the clip, Garner and Nicely jump on and off a box platform in perfectly synchronized time to "Stronger" by Sam Feldt. Once the two complete the choreographed sequence, Nicely states the obvious: "That was so fast!"

The pair's movements are so in-sync and energetic, you might almost think it was easy if it weren't for Nicely's comment. In reality, it's an impressive display of coordination and agility, and the extent of Garner's fitness skills isn't lost on her trainer.

"[Garner] likes to work really hard, she's very, very strong," says Nicely, adding that she's a "great dancer" to boot. "I consider her a professional athlete in what she's capable of physically. We both love to dance, we both love to work hard, I think it's a good combination." While Garner has referred to Nicely's sessions as "death by Beth," the actress seems to genuinely enjoy working out, says Nicely. "She's definitely someone that loves to show up and get a workout in and feel good," she says.

At this point, the two have been working out together for several years. A Broadway performer, marathoner, NASM-certified trainer, and certified pre/postnatal and corrective exercise specialist, Nicely incorporates multiple styles of exercise in her sessions with Garner. "On a typical day we'll do a solid warm-up and then we'll get the blood flowing and the heart rate up a bit with some cardio dances," says Nicely. "We might do two to four dances and then I'll usually take her through a plyometric box series." That's the type of coordination and agility challenge the two showed off on Instagram, and they'll usually complete three to four rounds. "And then we might take the heart rate down and pick up some weights to do some strength training. And then I'll get her back to the boxes and we'll do a plyometric series with one of those bigger plyometric boxes."

Things get intense. "I love being creative so I think people would see some of the stuff we do and be like, 'What? Oh my gosh, I can't believe that that is possible.' It's pretty advanced stuff," says Nicely. To give you an idea, one of Nicely's favorite things to do with Garner is a challenge that the trainer simply refers to as "The Circuit." It involves eight box jumps, 40 jumps with a jump rope, 16 leaps over a mini-trampoline while holding a 10-pound medicine ball — and all of that five times through. "My goal with everyone is to get through five rounds in under three minutes," and Garner has accomplished that "multiple times," says Nicely.

You can take a cue from Garner's multifaceted workouts even if you don't have access to Nicely's private training — or Garner's athletic prowess. Nicely founded a digital fitness platform, The Limit, which offers online classes along with occasional in-person training in New York. As the name suggests, the classes are designed to push you to your personal physical limits, inspired by Nicely's own experience testing her capabilities as a dancer and long-distance runner. "It's about respecting the level that you're at, and progressing from there, pushing past that limit in a very smart, progressive way," she says. Expect HIIT, strength training with heavy weights, exercises focused on muscular endurance with light weights, and dance. You can rest assured that the virtual classes are Jennifer-approved as well since the actress previously shared that she was taking them every morning toward the beginning of the COVID-19 pandemic.

If you want to try one of the exact workouts that Garner has completed, you can find three different variations on Nicely's not-so-simple circuits below, courtesy of the trainer. Fair warning: "Jen's dance background might make the moves look easy, but these circuits are advanced and she is very strong," says Nicely.

How it works: Begin with a dynamic warm-up and two songs of dance cardio, then complete one (or more!) of the circuits below.

You'll need: An 18-inch plyo box, a Pilates box, a set of 15-pound dumbbells, a jump rope, and a mini-trampoline.

A. Stand with feet on either side of a plyo box, with toes parallel and knees in line with second and third toes. Jump feet toward each other, landing on box.

B. Jump feet back out onto the ground to return to start.

A. Stand with feet on either side of a plyo box, with toes parallel and knees in line with second and third toes. Jump, landing with left foot on the box while lifting right knee.

B. Jump out, landing with both feet on the ground on either side of the box to return to start.

A. Stand with feet on either side of a plyo box, with toes parallel and knees in line with second and third toes. Keeping obliques engaged and torso facing forward, jump onto the box, landing with left foot in front of right foot as if riding a surfboard.

B. Untwist and jump out, landing with both feet on the ground on either side of the box to return to start.

A. Stand facing a plyo box. Jump forward onto box, then jump back off.

B. Immediately place hands on the box while jumping feet back to plank position. Keep toes straight, with knees in line with second and third toes, shoulders stacked over wrists, and core engaged.

C. Jump feet toward box and stand up straight to return to start.

Repeat entire circuit for a total of 4 rounds.

A. Stand with feet shoulder-width apart, toes parallel, holding a set of 15-pound dumbbells. Start with weights at armpits, palms facing towards each other in hammer curl position.

B. Squat by sitting back into heels and sending hips back, keeping core and back engaged and chest lifted. Knees should bend in line with second and third toes.

C. Exhale, forcing breath out of abdomen to engage deep core muscles while returning to standing position and pressing the weights overhead. Keep arms in line with ears.

D. Return weights to starting hammer curl position while lowering into next squat.

A. Stand behind a Pilates box with knees bent and torso in line with the angle of shins. Hold a set of 15-pound dumbbells, extending arms in front of body.

B. Pull elbows straight back in a powerful concentric contraction for one count, then extend arms forward in a slow eccentric movement back to the starting position for 3 counts.

C. Jump forward onto the box and back off, bracing core to hold body steady.

A. Start in a squat position facing an 18-inch plyo box. Swing arms for momentum and jump up onto the box, landing with toes parallel, and knees in line with second and third toes.

B. Either step or jump down from the box, landing softly to return to the starting position.

Repeat the entire circuit for a total of 3 rounds.

A. Stand with feet on either side of a plyo box, with toes parallel and knees in line with second and third toes. Jump feet toward each other, landing on box.

B. Jump feet back out onto the ground to return to start.

C. Jump feet back out onto the ground to return to start.

A. Stand with a jump rope resting behind feet, holding a handle with each hand, elbows bent.

B. Keeping chest lifted, make one full rotation with the rope, swinging it above head and beneath feet, jumping as the rope sweeps the ground.

A. Anchor left leg on a mini trampoline, with right foot on the ground beside the trampoline, knee bent in a side lunge position.

B. Keeping upper back engaged, chest lifted, and core activated, push right foot off the ground and onto the ground while moving left leg to the floor on opposite side of the trampoline in a side lunge.

Continue alternating, leaping side to side for 16 reps.

Repeat for 5 rounds total, aiming to finish in under 3 minutes. 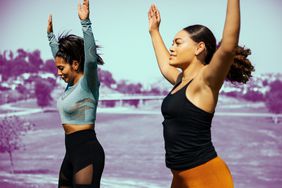 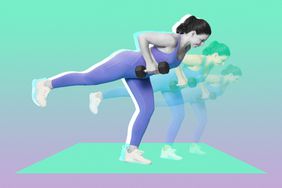 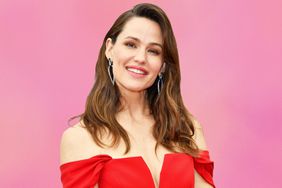 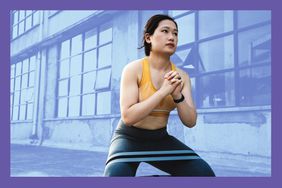 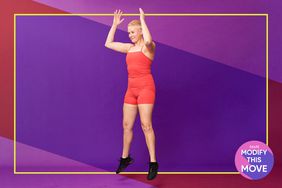