Kate Hudson's Muscles Are Quite Literally Quivering During These Core Exercises

Despite joking about the fact that having three kids “did a number on these hips,” the actress-slash-entrepreneur slays two intense workout sessions like they're NBD.

Kate Hudson has always been a warrior in the gym — before and after carrying three babies. Since giving birth to her youngest in 2018, though, Hudson's been open about the fact that getting back into her fierce fitness routine hasn't been easy. Still, she's not letting the challenge stop her — and her latest gravity-defying workouts are proof.

Over the weekend, the Fabletics co-founder took to Instagram to share videos of two recent sessions with her trainer, Brian Nguyen. In the clips, Hudson tackles two different types of core exercises — both of which are so intense your core muscles will likely twitch simply by watching the star do 'em. "She's starting to wake up! Carried 3 babies who did a number on these hips and shoulders!" she writes in her caption. "Ladies! We carry our beautiful children ALL DAY LONG (literally AND figuratively) and forget to balance it out. Time to balance that SH#! OUT! 🧘‍♀️🏋️‍♀️🤸‍♀️ #putmeincoachiwannaplay" (

And boy, she wasn't joking. In the first clip, the entrepreneur (who's also a founder of InBloom and King St. Vodka) begins in a plank position with her feet hanging from the handles of a suspension trainer (almost as if they're stirrups). Her forearms rest on a cushioned platform vs. the floor, providing an added challenge (think: unstable surface) to Hudson's core routine. Following Nguyen's instructions, Hudson slowly lifts her knees toward her chest to form a "diamond" half-pike position with her lower body. "So slow to the diamond," says Nguyen in the background. "Look at those legs!" And you can't help but do just as you can quite literally see Hudson's quad muscles quiver as she performs an impressively slow, controlled movement despite her arms being on an uneven, soft surface and her feet — clad in a pair of Hoka One One sneakers (Buy It, $130, nordstrom.com) — being in the air. After one rep, the mom of three looks up at the camera and asks, "how was that?" No answer is needed from Nguyen — she clearly crushed it. (

In the second clip, Hudson's busy doing some "ninja" kicks on the floor as Nguyen cheers her on: "Great job ninja! Way to keep it under the girls. Way to tear that floor." The star begins by planting her left arm on the ground and swinging her left leg under her body and out to the side while pulling her right arm back. She then seamlessly switches sides, planting her right arm on the ground and kicking her right leg under and out while pulling her left arm back. Not only does this full-body move requires some serious agility but it also demands strength from the upper body and core to help Hudson rotate between each single-leg kick. As if that wasn't intense in and of itself, Hudson — per Nguyen's guidance — amps up the intensity by speeding up her kicks and then slowing them down.

Many of Hudson's famous friends came through in the comments section of her post to offer tons of support and encouragement. Naomi Campbell, Katie Couric, and Paris Hilton all served up fire emojis, while Courteney Cox threw in three "hands up" emojis. But Uzo Aduba and Tracee Ellis Ross summed it up best: The Orange Is the New Black alum wrote, "A) PREACH 🙌🏿❤️ B). Way to BEAST 💪🏿❤️" and the Black-ish star added an enthusiastic "yesssssss!!!!! Inspiration!!!!" 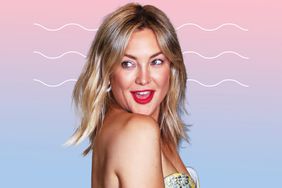