Plus, the goals she has her sights set on crushing next.

At just 20 years old, Ellie Goldstein has already become one of the most in-demand models on the block, finding global fame after becoming the first model with a disability to land an international campaign in partnership with Gucci Beauty and Vogue Italia in 2020. Ever since, she's served as a cover star and face of some of the buzziest fashion and beauty brands, including Laura Mercier and Victoria's Secret Pink. But her latest role taps into her tremendous inner strength, and she's reminding her newfound global fanbase why "impossible is nothing."

Goldstein has coupled up with Adidas as part of the brand's Impossible is Nothing initiative, which aims to empower girls, women, and LGBTQ athletes all over the globe in a multifaceted, ongoing program that includes innovative new activewear and continued alliance with grassroots organizations that focus on women and girls in sport. On February 14, she'll be part of the activewear brand's new film series, I'mPossible, alongside a slew of other trailblazers, including volleyball player Tifanny Abreu; poet and basketball player Asma Elbadawi; runner Fatima Ibrahimi; Squid Game star and model HoYeon; Olympic skateboarder Momiji Nishiya; and yoga teacher, Jessamyn Stanley, who will share their stories in hopes of inspiring other folks in sports. (

Though she's taking the modeling world by storm, Goldstein, a U.K. native, also has a passion for dance, which is why working with Adidas (a brand that celebrates dance as sport) is so fitting for her, she says. But if you think joining one of the biggest athletic brands in the world might make a young model sweat a bit, Goldstein couldn't be happier about the opportunity and her experience thus far. She calls the Adidas team "amazing," adding that "they make me feel special. I love working with everyone involved, and I hope to continue [beyond this new campaign]. They are my family, and I love them."

Seeing herself as the face of a massive brand is still new for Goldstein, who sums up the experience of her modeling career so far as "overwhelmed, proud, excited, happy." Essentially, "I'm living my best life," she says. Her joyous spirit makes her a natural fit for the brand as they continue innovating their designs and offering products to help every athlete feel confident as they crush their goals. (

In 2021, Adidas launched Stay in Play, its first-ever line of period-proof gear to make menstruating on the move easier and stress-free, as well as Ultraboost 22 running sneakers, built specifically to address differences between typical male and female instep height, heel anatomy, and gait cycle trends. Coming soon, the brand is also launching a full range of sports bras in 72 sizes, designed with the help of 43 models of different body types so that finding your perfect fit is a breeze.

And with such a bevy of incredibly talented and diverse names on the Adidas roster, Goldstein hopes her inclusion will help others see themselves in these images — especially if they haven't felt represented by big brands in the past. As for how both the fitness and modeling industries can be more inclusive, particularly to disabled athletes like Goldstein, who has Down syndrome? It's simple, according to Goldstein: "To see real people out there in the world," doing what they do and living their best lives, as she does in spades. (

Along with its exciting list of new partners, Adidas has big plans for 2022, including the launch of the new Breaking Barriers Academy, which will provide gender equity learning resources to sporting clubs, coaches, and athletes in Europe; as well as continuing its U.S.-based partnerships with the Black Women's Player Collective and Common Goal and supporting the next generation of WNBA stars through the Adidas Legacy program.

Major modeling contracts aside, Goldstein already has plenty on her plate. In her second year of college, where she's studying performing arts, she says loves to unwind by reading books, as well as singing and dancing, counting "Perfect" by Ed Sheeran as one of her personal favorite songs. And like any other Gen Z-er, she loves to scroll TikTok, clarifying, "not my TikTok, I love other people's." Her personal heroes are her mom who she says supports her endlessly, her sister Amy ("she's cute!"), her dad ("he always makes me laugh"), and her dance teacher, Becca. "She always supports me," she says of their bond. "We work together as a team, and I love her."

Goldstein has already accomplished so much, but she has even bigger dreams for the next few years. Along with continuing her modeling career, she wants to "be on the cover of Vogue, work with Adidas again, continue to inspire others, and go to America," she says. It's a safe bet that she'll have it all checked off in no time. And when it comes to the message behind her Adidas campaign "impossible is nothing," Goldstein sums it up flawlessly saying she's the one who makes her life possible, "by being myself, happy, passionate, and confident." 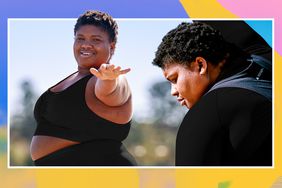