The 24-year-old multi-sport athlete was born with a rare condition that left him without legs, but that hasn't stopped him from crushing his fitness goals and helping others do the same.

If you haven't "met" Zion Clark yet, get ready to be impressed: Clark is a multi-sport professional athlete who holds a Guinness World Record for the fastest 20-meter race on two handsand has his sights set on competing in both the Olympic and Paralympic Games. When Shape sat down with him over Zoom, it was clear that he exudes the easy confidence of someone who knows they've worked hard to become the best at what they do.

Still, it's been a long road to get to where he is now, and the 24-year-old has no plans of slowing down anytime soon, says Clark. He plans to add more firsts to his list of well-deserved accomplishments, all while defying stereotypes about adaptive athletes and people with disabilities.Ahead, find out how he got his start in the fitness world, and where he wants to go next.

Finding His Power In Wrestling

Clark was born in Columbus, Ohio in 1997 with caudal regression syndrome, a rare birth defect that left him with no legs. Despite his physical limitations, he found wrestling at the age of six, and while Clark says he didn't see it this way at the time, the sport would ultimately shape his future in a big way.

"I was a kid; I was just trying to have fun," he tells Shape. "I was just able to relax and have fun and not worry about all the other problems I was dealing with," he explains, referencing his upbringing in the foster care system, where he has said he was often bullied and mistreated.

Although wrestling began as simply a way for a young Clark to let loose and have fun, it became a bigger part of his life in high school, he explains. There's even a Netflix documentary short about his wrestling pursuits as a teenager. After finding a community within his high school wrestling team and gaining the support of several people in his life, including his wrestling coach and his mom, who adopted him at age 16, he really began to thrive, the documentary revealed.

Once I broke the seal, it was, like, alright, it's time to just let everything overflow and see how far I can ride this train.

Around this time, Clark says he also gained the athleticism he needed to take wrestling to the next level. "I was just a senior in high school, and I was finally able to break that barrier — it was like a mental barrier," he says. Clark went on to receive a wrestling scholarship to Kent State University at Tuscarawas in New Philadelphia, Ohio. He also wrestled as an honorary member for Team USA in a pay-per-view match against a Team Puerto Rico competitor in 2019, he says, recounting how he took his athletic pursuits up a notch. "Once I broke the seal, it was, like, alright, it's time to just let everything overflow and see how far I can ride this train,"he says of his professional wrestling career.

Breaking Records Is Just the Beginning

That train certainly took him far. In addition to wrestling, Clark got involved with wheelchair racing at age 18 (more on that later). But his "first big athletic venture outside of track and wrestling" was attempting to break a world record, he says. After a representative from Guinness World Records saw a video of Clark racing on his hands, the organization became interested in putting his speed to the test. And in February 2021, Clark earned the Guinness World Record for the fastest man on two hands, racing 20 meters in 4.78 seconds on his high school track in Massillon, Ohio.When discussing how it feels to have earned this title, Clark's pride is palpable. "I mean, I'm the fastest," he says. "It kind of speaks for itself, and it's a good feeling."

It was also a full-circle moment for him to set the record in his hometown, where his athletic career began, says Clark, who now lives in San Diego. "I wanted to do it back home," he explains. "I wanted to do it in front of my mom, my people, my family. I was, like, listen...it's gonna be, way under five seconds, and I was right. It was one of those moments where I could feel it in my bones, you know? And I went, and I executed."

Now, he's working toward being the first American to compete in both the Olympic and Paralympic Games. Clark is currently training to qualify for the 2024 U.S. Olympic Games in wrestling and the Paralympic Games in Track & Field for wheelchair racing. "I'm having fun right now," says Clark. "I'm competing and beating some of the best guys in the world. It's just an awesome feeling. Every year I get faster. Every year I get more experience…I want to see how far I can take it."

It was one of those moments where I could feel it in my bones, you know? And I went, and I executed.

His training is specific to whatever he's competing in at the moment. "I have to train certain muscle groups to do certain actions," he explains. "If I'm fighting, I'm gonna train the muscles around my shoulders to be more durable, so I can take more damage and dish out more damage. But when I'm doing track, I have to work more on my sides and my abs, because when I'm pushing my chair, I have to use my abs, my chest, my sides, and my shoulders." (

What People Don't Know About Staying Fit In a Wheelchair

So, how does he stay motivated to grow as an athlete? Finding a serious competitor in his field seems to encourage him to keep getting better. "I have to be around people that, honestly, are better than me at what I do," he says, naming fellow wheelchair racer Erik Hightower as his healthy rival — someone who pushes him to be better. "We've gone back and forth since I was in high school," says Clark. "I have a lot of respect for him...not many people can push me to new heights like that."

Clark acknowledges the challenges he faces due to his physical disability, but nothing has stopped him from becoming a professional athlete or helping others see their own potential when it comes to fitness. "A lot of people think that just because you're disabled that your ability to be successful physically is limited," he says. "And here's the thing: They're right and they're wrong."

To Clark, it all comes down to having a positive mindset. "With a physical disability, there are very obvious limitations, but at the same time, if...you're the type who wants to get up and try to attempt to be something more than what people are looking at you as, you're probably going to have success," he says. (

A lot of people think that just because you're disabled that your ability to be successful physically is limited...And here's the thing: They're right and they're wrong.

That has definitely been the case for Clark, who has recently taken on a role with FitXR, a virtual reality workout app, to make fitness more inclusive for those with physical disabilities and injuries. While he has access to a gym with accessible equipment, Clark points out that's not the case for many people. On top of that, some people with disabilities or physical limitations may feel nervous about going to the gym if they think they're behind others in terms of skill and experience or fear they won't fit in, he adds.

This is a whole new world you can tap into, where you can be in the comfort of your own home and get that absolute badass workout in.

Specifically, Clark helped create seated boxing classes (available to take now) and seated HIIT classes that will be released this July on FitXR. All of his classes are designed for people who have mobility issues, disabilities, or injuries, but anyone can take them.Soon he'll also appear in the virtual studio within the FitXR app in the form of an avatar on a hoverboard to enhance the already immersive experience. "I want people to feel good about themselves when they do [these workouts]," he says. "I want you to be happy and energized and excited the whole time."

Clark's classes and his overall presence in the app mark major wins for adaptive athletes being represented in the fitness space. It's also a big step forward in terms of accessibility for those with disabilities and injuries who want to work out. As for anyone who feels intimidated by the idea of starting a new fitness routine, "I would say, full send it. Just go for it," says Clark. "No one said working out was easy," he adds. "So go in with that mindset knowing it's going to be hard. Just accept the challenge and go for it." 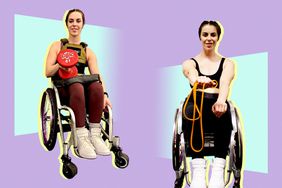 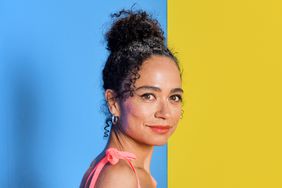