The Mewis sisters may have just touched down at the Tokyo Games, but they've already made history.

For Soccer star Sam Mewis, who narrowly missed playing in the 2016 Olympic Games in Rio de Janeiro, earning a spot five years later is a longtime dream come true. But chasing Olympic glory at the Tokyo Olympics will be a unique experience for the 28-year-old athlete, as she'll be doing so with her BFF, older sister Kristie, 30, at her side.

In June, both Sam and Kristie were named to the U.S. Women's National Soccer Team's 18-player Olympic roster, making them the first sisters in history to rep U.S. Soccer together at a major tournament.

"When she confirmed that she made it too, it just made it a lot sweeter and a lot more exciting," Sam told PEOPLE Magazine earlier this month. "We actually FaceTimed our parents together right away to tell them, and that was just a really special moment for all four of us to be on the phone together and celebrating."

The Massachusetts natives grew up in the town of Hanson, located just outside of Boston — but they weren't always besties. "We were just polar opposites," Kristie told PEOPLE. "It is so funny that we're best friends now because we literally hated each other growing up. But at the same time, we were kind of like secretive best friends because we literally did everything with soccer together."

The siblings found common ground on the soccer field, and while that made them competitive with one another, Sam says she looked up to her big sis for inspiration, Kristie's athletic prowess motivating her to work harder. Both sisters prospered on the U.S. youth international circuit and played together at the Women's World Cups at the U-17 (under-17) and U-20 (under-20) levels in 2008 and 2010, respectively.

After playing for Boston College, however, Kristie fell off the USWNT roster in 2014 and pursued a career playing pro in the National Women's Soccer League. The older Mewis found solid success in the professional soccer world as a midfielder for the Houston Dash, earning the title of MVP in 2020. Meanwhile, Sam played soccer for the UCLA Bruins and continued playing for both club and country, signing with the Pali Blues in 2013, and going on to win three NWSL Championship titles with the Western New York Flash and North Carolina Courage. In 2016, she was named as a USWNT alternate for the Summer Olympics in Rio de Janeiro, and in 2020, she was named the U.S. Soccer Female Player of the Year.

The tables turned a bit around 2019 when Kristie began taking inspiration from her younger sibling's success. The older Mewis had torn her ACL in 2018, and between recovering from the injury and seeing her sister crushing it in her career, she decided to reconsider the course of her athletic future.

"That injury, and the time out, was one of the worst periods I've ever experienced. But despite how miserable it was, it was rewarding too because it taught me so much — about my body and about appreciating every moment on the field — that is now making me stronger," Kristie told FIFA, a football organization, last year. When discussing her sister's success in a 2020 interview with ESPN, Kristie said, "I was so, so happy for her, but I obviously wanted to be next to her doing it."

Once she was back in fighting shape, Kristie returned to the Houston Dash and, recognizing that renewed strength and commitment, the national team's head coach Vlatko Andonovski invited her to the squad's training camp. Kristie was then subbed into a "friendly" (aka an exhibition or preseason game) against the Netherlands in 2020, the same year she was called back to the USWNT, and will now compete at the Olympic level with Sam.

Despite the competitive sibling rivalry of their childhood, the sisters grew super tight over the years, and now "have so much in common," according to Sam. That's including: coffee, Gossip Girl, and lounging. "We're like relaxation specialists," Kristie added during a 2020 interview on the USWNT YouTube channel.

Another thing the Mewis sisters can agree on? Their parents' unconditional support got them to where they are today. "My dad used to drive us 13 hours on a weekend for a club tournament," Sam told USWNT in 2014. And as their mom told Sports Illustrated in 2010, she put up with a lot from her two soccer-obsessed kids: "They played so much, we still can't seem to get the grass to grow."

The sisters recognize the familial support was critical to their current triumph. "Their commitment was the sole reason that Kristie and I have both made it so far," Sam said in 2014. "I can't imagine what it would have been like without them. Our soccer success is solely because of our parents' commitment."

Sam and her sister may not have always gotten along as kids, but they did share a role model: soccer Hall of Famer Mia Hamm, who not only won the World Cup twice but also won an Olympic gold medal at Atlanta 1996, silver at Sydney 2000, and gold again at Athens 2004. In 1999, when Kristie was eight and Sam was six, they watched Hamm lead the U.S. team to the World Cup. "That was our dream," Sam said in a 2014 interview with U.S. Youth Soccer. "We used to wear Mia Hamm jerseys around the house."

With Sam and Kristie now taking their sister act to Tokyo, there's a good chance younger fans may soon be running around the house in jerseys with "Mewis" printed across the back. 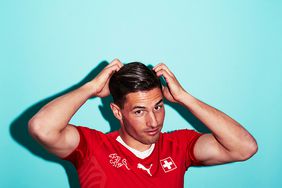 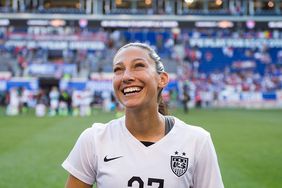