The insanely fit singer made a major pregnancy announcement on Instagram

Earlier this week Pink surprised the world by announcing on Instagram that she's pregnant with her second child. Simply captioned "Surprise!" the image shows the singer sporting a baby bump while posing alongside her 5-year-old daughter, Willow. And, of course, they're wearing matching Western meets boho-chic ensembles, complete with ridiculously adorable hats and cowboy boots.

Why do we love this so much? Not only is she a kick-ass singer, but Pink is also an advocate for body positivity and allowing yourself to do and eat what you want-she's all about that moderation. Plus, she loves talking about Willow, making her one of our favorite fit moms ever. Here are some of the best things she's said about motherhood, eating healthy, and more quotes to inspire a major girl crush. (She's not the only one, though: Here are more super-fit celebrity moms we love.)

Pink has been open about the challenges of motherhood, but she's also spoken about how rewarding it can be and how much perspective you gain about the rest of your life. "I have lived a lot of life in a very short time, and you get hardened a little bit-you get jaded, you build up walls," she told People. "And when you see this little kid, and you get to watch them through infancy to toddler to little person, it's amazing,"

On Her Tour Diet

Pink's acrobatic dance moves are nothing short of jaw-dropping, so she needs to make sure her body is fueled for a physically challenging performance. "I eat a lot [on tour] because I work out four and a half hours a day: a two-hour show, plus yoga, cardio, and a rig check with the flying apparatuses," she told Food & Wine. "But here's the issue: I don't change my eating when I get home. So everyone always asks me, 'What are you going to do after?' And I say, 'Get really fat and happy.'" After spending months on tour, girl 100 percent deserves it.

On Loving Your Body

In an interview with Good Morning America earlier this year, Pink decided to be refreshingly real about everyone's focus on women's bodies. "There are so many different kinds of bodies," she said. "How can you shame one over the other? My thing is, if you have all four limbs and all five senses, you're doing A-OK and anybody that has an issue with that needs to find some gratitude."

That's not the first time Pink has fought back against body-shaming haters, either. After she appeared at a charity event in 2015, she received tweets about her weight. In true fashion, her response was nothing short of classy. To summarize, she essentially said, "I am perfectly fine, happy, and my voluptuous and crazy strong body is having some much-deserved time off."

While Pink hasn't shared the gender, due date, or any other details about her latest pregnancy, we're excited to hear more from this badass soon-to-be mom of two. In the meantime, you can find us stealing her secrets for staying in such insane shape. 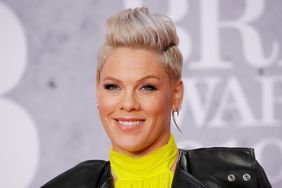 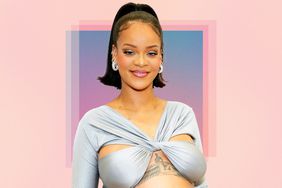