"For anyone saying I quit. I didn't quit my mind and body are simply not in sync."

There is no question that Simone Biles is the greatest gymnast of all time. And this week at the Tokyo Games, she made it clear that prioritizing her mental health is more important than adding another Olympic medal to her already impressive collection.

Biles, who withdrew from both the team final on Tuesday and the individual all-around gymnastics final on Thursday, recently opened up on her Instagram Stories about how her "mind and body are simply not in sync." The six-time Olympic medalist also detailed the phenomenon known as the "twisties," which can cause a gymnast to lose their sense of dimension and space while in the air, according to BBC, and could potentially cause them to lose control of their body and do extra flips or twists while airborne. The condition may also lead to an athlete being unable to safely land.

When asked by an Instagram follower on Friday if she had experienced the "twisties" before, Biles replied, "I have experienced them before. They're not fun to deal with." She continued on her Instagram Stories, "it's honestly petrifying trying to do a skill but not having your mind & body in sync. 10/10 do not recommend." Biles also explained that when experiencing the "twisties," she "literally can not [sic] tell up from down."

"It's the craziest feeling ever. Not having an inch of control over your body," she continued. "What's even scarier is since I have no idea where I am in the air I also have NO idea how I'm going to land. Or what I'm going to land on. Head/hands/feet/back..."

In terms of how long the "twisties" can last, Biles told her 6.2 million IG followers that it can vary. "Typically for me it's usually 2 or more weeks when I've had them before," she said. "Honestly no telling/time frame something you have to take literally day by day, turn by turn." The gymnast added on her Instagram Stories that she began to feel the "twisties" sensation "after prelims [preliminary] competition the VERY next morning."

Although Biles has received an outpouring of support from both celebrities and her teammates, including Sunisa (Suni) Lee, who won the gold medal in Thursday's individual all-around final, she's also been plagued with messages from online trolls, calling her a "quitter." Biles fiercely clapped back at her haters on Friday, taking to her Instagram Stories once more to say "for anyone saying I quit. I didn't quit my mind and body are simply not in sync." She continued, "I don't think you realize how dangerous this is on hard/competition surface, nor do I have to explain why I put health first." (

Before Biles herself opened up about the "twisties," former Olympic gymnast, Nastia Liukin, broke down the phenomenon the 24-year-old athlete experienced during the competition. "I think when you actually take a look at what happened on that vault — she got lost. And any gymnast knows — we call it the 'twisties' — and basically she was supposed to do another whole rotation and got completely lost in the air. It's a mental error, essentially, that every single gymnast goes through," Liukin told NBC Sports on Tuesday (after praising Biles' decision to withdraw).

Liukin, who won the gold medal in the individual all-around final at the Beijing Games in 2008, also wrote a touching note to Biles on Instagram on Wednesday, thanking her "for epitomizing what the next generation of role models should be." "Thank you for helping the world realize that prioritizing your physical and mental health is the mark of a true champion," wrote Liukin. "Thank you for illuminating that nobody is defined by the depth of their trophy case, and that you don't owe anything to anyone but yourself and the pursuit of happiness."

With the event finals slated for next week — which includes the balance beam, the uneven bars, the vault, and floor exercises — it remains to be seen if Biles will compete. No matter her decision, she will have the support of all who have been cheering her on both near and far. (

Complete Guide to the Tokyo Olympics: How to Watch Your Favorite Athletes
Was this page helpful?
Thanks for your feedback!
Tell us why!
Related Articles 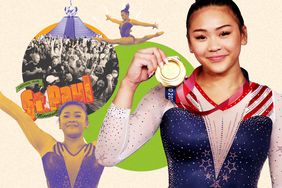