Just a casual Thursday at practice for the G.O.A.T. gymnast.

Simone Biles is looking to make history once again.

Biles, who is already the most decorated female gymnast in history, practiced her routine on Thursday at the women's Olympics gymnastics podium training in Tokyo. Biles performed a near-flawless execution of the challenging Yurchenko double pike, an insane (!) vault she previously landed in May at the 2021 U.S. Classic, according to People.

Named for Russian gymnast Natalia Yurchenko, who performed the move in the 1980s, the Yurchenko double pike had not been attempted by another woman in competition — until Biles. To perform the move, a gymnast has to "launch into a roundoff back handspring onto the vaulting table," according to The New York Times. From there, the athlete must "propel high enough to give [themselves] time to flip twice in a pike position," which is when the body is folded and the legs are straight, according to The New York Times, and then land on their feet.

Should Biles land the Yurchenko double pike vault during the Olympic competition, the move will be named after her, according to NBC News, and it will become her fifth eponymous skill. The 24-year-old gymnast has four other moves named in her honor, including the Biles, a double-twisting double-tucked salto (aka, a flip or somersault) backward dismount for the balance beam. For floor exercises, there's the Biles, a double layout half out (which is when your body is typically in a stretched position), and the Biles II, a triple-twisting double-tucked salto backward. The four-time Olympic gold medalist also owns the vault move called the Biles, which is a Yurchenko half-on with two twists (this is when an athlete rotates around the body's longitudinal axis, according to USA Gymnastics). In order to score such a prestigious honor, a gymnast must successfully perform a move for the first time at the Olympics, World Championships, or a Youth Olympic Games, according to the FIG Women's Artistic Gymnastics Code of Points.

With just days to go before the competition, Biles said Thursday on her Instagram Stories that she's "feeling pretty good!!!" post-podium training. In a separate Instagram Story also shared Thursday, Biles expressed gratitude for coaches Cecile Canuqet-Landi and Laurent Landi, who recently said it remains to be seen if Biles will perform the Yurchenko double pike in competition in Tokyo. From the look of Thursday's showing, it seems the G.O.A.T. — who just nabbed her own Twitter emoji ahead of the Games — is ready for another shot at Olympic glory. 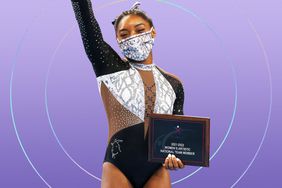 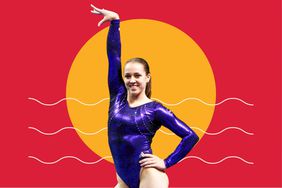 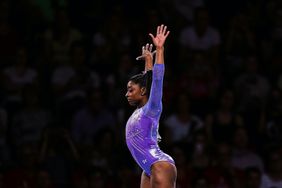