As a former gymnast and competitive weightlifter, Ashley loves every form of exercise and is always up for trying a new workout. She currently works on the web team at TIME.com. She was previously on staff at Marie Claire and her work has appeared in print and online in publications including The New York Times, Maxim, Us Weekly, Country Living, St. Petersburg Times and LIVESTRONG.com. She's a graduate of the University of Florida's College of Journalism and Communications.

It's not easy to look sexy at 56, but Sharon Stone, who became a sex symbol 22 years ago in Basic Instinct, makes it look as much on the March cover of Shape. Stone is currently juggling motherhood (she has three boys), a role in the upcoming romantic comedy Fading Gigolo, and the new TNT series Agent X.

The star doesn't look this good by faking it either. She decided to focus on aging gracefully rather than fading into the youth-obsessed standards of beauty. "This idea that being youthful is the only thing that's beautiful or attractive simply isn't true. I don't want to be an ‘ageless beauty.' I want to be a woman who is the best I can be at my age." In her new cover story, she touches on the fact that many surgeons have tried to get her to go under the knife for a face-lift. Her biggest concern with plastic surgery is that everyone is starting to look the same. "We've got 400,000 girls with beachy blonde hair, the same nose, gigantic lips, implants in their cheeks, and little Chicklets for teeth. Are they really prettier?" she says.

But she hasn't always been this confident. "There was a point in my 40s when I went into the bathroom with a bottle of wine, locked the door, and said, ‘I'm not coming out until I can totally accept the way that I look right now.' She eventually decided to move forward with a healthy mindset, keeping herself fit through exercise and plenty of stretching. Unlike some celebrities with private gyms, she swings by 24-Hour Fitness for her workouts. And her routine is anything but. "Every time I exercise, I do something different based on which areas need to get in motion," she says. She credits her physique to total-body stretches, strength straining, yoga, and dance. She proves you can fit in a workout anywhere, and we mean anywhere. "Sometimes I do a series of standing leg lifts and circles in the tub, using the water as resistance."

Her diet has changed a lot since growing up in 1970s Pennsylvania when every meal included mashed potatoes and gravy. Stone prefers eating steak, porterhouse, rib eyes, and New York strip, and can do so because of her low cholesterol and low blood pressure. She also steers clear of alcohol completely. After battling weight gain in her twenties, she learned how to discipline herself by following in the footsteps of Jane Fonda, and she's gracefully accepting her body's changes. "I'm not trying to make myself look like a girl because I'm not a girl anymore. I'm very happy about being a grown woman. I think there's a lot of sexuality, and glamour, and allure, and mystery to being a woman that you just don't have when you're young."

For more from Stone, plus her exclusive total-body workout, pick up the new issue of Shape, on stands and iPads nationwide February 24. 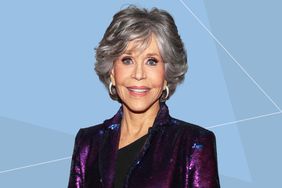 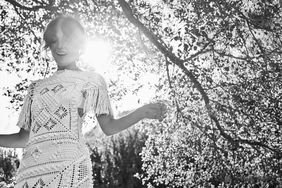 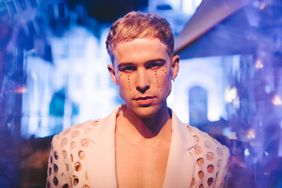