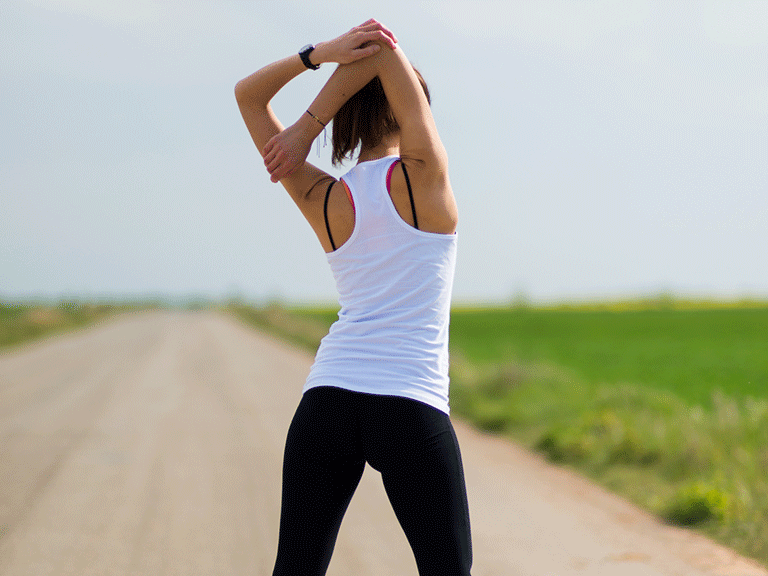 Amy Jackson, 44, admits that she never considered herself athletic when she was younger. “When I was 20, I ate anything,” she says. “I never ran in high school. Because I wasn’t interested in playing team sports I wasn’t in shape, and I didn’t think of myself as an athlete.”

She ran short distances in her late 20s since it was cheaper than joining a gym, but it wasn’t until after she had children that she got into running long distances as a way to maintain her fitness. “My son turned 3 when I was 38, and I wanted to get the baby weight off,” she says. “I knew that running was something I could easily do.” To help accomplish her goals, Jackson signed up for a 10K, and would wake up before the rest of the family 3 to 5 days a week to train. “It didn’t take away from my family time, and I discovered it was my ‘alone time.’”

Not only did Jackson start to feel better physically, but she also noticed a change in her mental state, now that she was devoting the time to taking care of herself — and she wanted more. “After the 10K I decided to try a half marathon,” she says. “I ran my first half marathon at 39. I’ve now done 10, and I’m signed up for three more. I also ran a full marathon at 41. This accomplishment has been huge for me. Now I feel like I can say I’m an athlete!”

Jackson thinks that making time for fitness is easier these days than it would have been in her 20s, since she’s mastered the art of structuring her life to balance work, family, and fitness. She also credits a mostly vegan diet for helping her stay healthy. The one thing that does put a damper on her fitness routine? “Aches and pains, all the time,” she says. “I can’t run every day, and I definitely feel the difference in my legs when I am training for a half and when I’m not.”

In fact, Jackson was diagnosed with tendonitis in her left ankle after her marathon, and she was in physical therapy for three months. “I have learned that I have to stretch more, and I can’t run more than two days in a row. I have to rest. I also try to incorporate yoga and walking into my routine. Even with the pain, though, it’s important to me to continue to get out there and exercise, because the alternative is worse.”

Starting small is the key to success, Jackson says, but attaining healthy fitness goals is possible for everyone. “You have to have the support of the people you live with,” she says. “Tell them you will be a better mom and wife if you have the chance to exercise. Communicate when you would like to exercise, and stick to it. Do only the exercises you love, and do them often!”