From the Koala Challenge to the Target Challenge, TikTok is packed with fun ways to keep yourself and your loved ones entertained. Now, there's a new challenge making the rounds: It's called the Center of Gravity Challenge, and it's pretty fascinating.

The challenge is simple: A man and woman record themselves hanging out on all fours next to each other. They move to have their forearms resting on the floor, followed by their elbows, with their faces resting in their hands. Then, they quickly move their arms from the ground to behind their back. In most of the videos, the men end up face-planting while the women hold themselves up (and, of course, laugh).

OK, but…what? Some TikTokers are saying this is an example of how men and women supposedly have different centers of gravity, while others claim that it shows women have "better balance." So, what's actually going on in this viral TikTok challenge? (

First, let's be clear on what "center of gravity" means.

NASA defines center of gravity, aka center of mass, as the average location of the weight of an object. Britannica takes it one step further by calling the center of gravity an "imaginary point" in a body of matter where the total weight of the body is thought to be concentrated.

Center of gravity can be tricky to determine because the mass and weight of an object may not be uniformly distributed, according to NASA. And, while the same is true for humans, there are some general rules of center of gravity that are thought to apply differently to men and women, says Ryan Glatt, a psychometrist at the Pacific Neuroscience Institute at Providence Saint John's Health Center.

A lot of it boils down to anatomy, explains Glatt, who has a background in brain health and exercise science. "Because women tend to have larger hips than men, they will have lower centers of gravity," he says. Men, on the other hand, tend to "have more distributed centers of gravity."

There has been some research done on this, including one study that found female astronauts are five times more likely to have trouble with low blood pressure after returning from space compared to their male counterparts. The reason, the researchers theorized, is that women typically have a lower center of gravity, which can impact blood flow and, as a result, blood pressure.

So, why does the Center of Gravity Challenge seem to be tougher for men than women? Glatt says it's about body positioning in the challenge. "During the challenge, the trunk is parallel to the ground and, when people remove their elbows, their center of mass is highly dependent on the knees and hips," he explains. That's no problem for women, many of whom already have their center of gravity in that area, says Glatt. But, for people who have a more evenly distributed center of gravity (i.e. typically men), it can cause them to topple over, explains Glatt.

Center of gravity isn't the only factor at play here, though.

Rajiv Ranganathan, Ph.D., an associate professor in the Department of Kinesiology at Michigan State University, points out that people who "win" the challenge seem to change their positioning just before moving their arms behind their back. "It seems that the people who maintain balance in this task are leaning back with their weight on their heels when they put their elbows on the floor," explains Ranganathan. "This would tend to keep the center of gravity relatively close to the knees and therefore will be easier to balance even when you remove your elbows," he says.

People who fall over, on the other hand, seem to "almost adopt a push-up stance, with the weight on their hands a lot more" than their hips and lower body, he adds.

For this to be a "more convincing demonstration" of differences in center of gravity, Ranganathan says the challenge would need to be filmed from the side to make sure everyone has the same position before removing their elbows. "My guess is that the posture makes a much bigger difference here as to whether someone can stay balanced or not," he says.

Of course, every person's body is different. Ranganathan says men who have curves or women with smaller hips, for example, could easily have different results with this challenge, meaning it really does come down to anatomy and individual body differences rather than gender alone.

Regardless, just know that this challenge "has nothing to do with performative balance," says Glatt. That said, if you try it at home, just make sure you have a soft surface for your head to land on in case you do face-plant.

Looking for other ways to test your balance? Try this karate-meets-Pilates challenge from Blogilates' Cassey Ho. 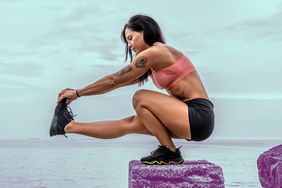 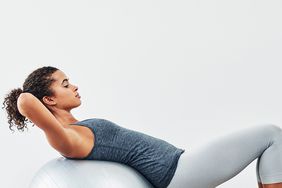 How to Use an Exercise Ball — Plus, 7 You Can Shop Now 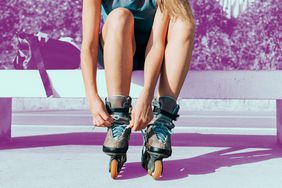 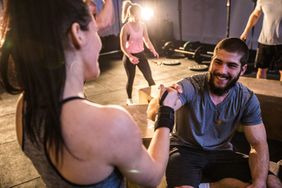 This CrossFit Partner WOD Will Crush You In 15 Minutes 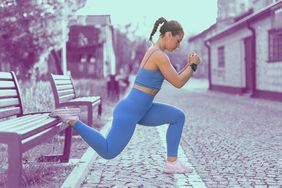 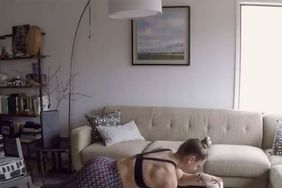