You'll boost your heart rate while building speed and agility. 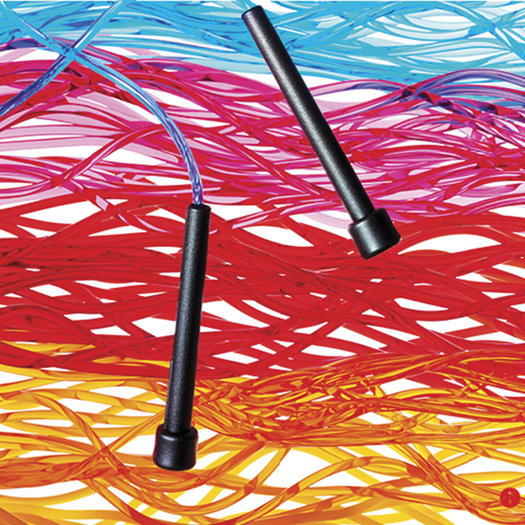 “Jumping rope is one of the best cardiovascular full-body workouts on the planet,” says Christa DiPaolo, a creator of The Cut: Jump Rope, a new high-intensity class at Equinox gyms. It’s also a convenient one-stop session for building speed, agility, and coordination. DiPaolo codeveloped the class to crank your heart rate and metabolism with a mix of different jump rope intervals (you’ll burn an impressive 13 calories per minute) followed by sculpting moves to condition your body. So no worries about monotonous nonstop hopping. (This creative jump rope workout is just as varied.)

All you’ll need to do this routine is a trusty jump rope—or two if you’re up for an extra challenge and an even bigger burn. DiPaolo designed the workout here with cues for using a lighter speed rope and a weighted power rope as you’d do in her class. A light rope lets you go faster, accelerating your heart rate, while a heavy rope (we recommend a two-pound one) activates more of your upper-body muscles and core, DiPaolo says. And while the heavy rope is more of a challenge in some ways, it’s actually great if you’re rusty at jumping rope because the added heft slows down the rotation, giving you more time to catch air and get in rhythm. (Strapped for time? Try Kourtney Kardashian's 5-Minute Jump Rope Warm-Up.)

A few pointers before you begin: “Keep jumps as low to the ground as possible, landing gently on the balls of your feet, with elbows pulled into the rib cage at either a 90- or 45-degree angle,” DiPaolo says. Turn the regular rope with your wrists; if you’re using a weighted rope, engage your forearms to keep stress off the wrists. Whether you stick with one rope or switch between two, expect to get breathless!

Side straddle: Jump feet hip-width apart for one jump and back together for the next.
Skiers: Keeping feet together, jump from side to side on each rotation of the rope.
Double-unders: Do one jump for every two rotations of the rope. Use wrists to increase speed of rope so it passes under feet twice as you’re in midair.
Crisscrosses: Cross at the forearms and perform a single jump, then open arms back up and perform another single jump; continue alternating.
High knees: Bring one knee up toward chest with each rotation of the rope, alternating knees.

How it works: Start with the warm-up, then do three 7-minute rounds that alternate between timed intervals of jumping rope and as many reps as possible of conditioning moves.

Total Time: up to 30 minutes

You will need: Jump rope

Fold speed rope in half twice and hold one end in each hand. Do 20 seconds each of:

30 seconds walk-out push-ups: Standing with feet hip-width apart, squat down, place palms on floor, and walk hands forward to get in plank. Do a push-up. Walk hands back to squat. Stand up; repeat.

1 minute burnout jumps: Move as fast as you can and get breathless.

If using two ropes, use the speed rope here.

30 seconds squats with alternating front push kicks: Do a single squat, then kick right leg forward as you stand, flexing foot and driving with heel, hands in front of chin. Switch sides; repeat.

If using two ropes, use the weighted rope here.

30 seconds in-and-out squat thrusts: Place rope on floor in a circle. Stand facing the circle and jump both feet into the center and then out. Do a squat thrust, placing palms on floor outside circle, jumping feet back to get in plank position and jumping them forward to return to squat. Return to standing facing circle. Repeat, jumping feet into center of circle again.

If using two ropes, use either here. Stick to basic jumps if using weighted rope.

Scale up: Turn squat thrust into a burpee, adding a push-up after plank position and a vertical jump after the squat.