Greg Presto
Greg Presto is a freelance writer, editor, and video producer in Washington, D.C. He has written service-driven content about sports, fitness, health, and adventure for clients including Men's Health, Nike, Reebok, Nutrisystem, USA TODAY Sports, America’s Best Contacts & Eyeglasses, South Beach Diet, Mindful.org, United Educators Insurance, and more. Greg is also the author of the Workout Bucket List, a compilation of more than 300 races, runs, lifts, and experiences that make fitness fun, which was published by Running Press in April 2022. Previously, he was a video producer at USA Today Sports and associate editor at Men's Health. Greg received his bachelor's and master's degree in journalism from Northwestern University.
Shape's editorial guidelines

Get more from every minute by swapping out ineffective and risky exercises (looking at you, hip abduction machine) for smarter ones. Here's what moves and machines to steer clear of entirely, and some more beneficial exercises to replace them.

You may have heard rumors that using a hip abduction machine benefits the glutes. Plus, using one feels incredible — you can use a lot of weight, so you feel strong and experience a serious burn. But hip abduction and adduction machines are dangerous because your body isn't designed for those movements, says Nick Tumminello, a NCSA-certified trainer and owner of Performance University in Baltimore.

"There's nothing remotely like these movements in life," says Tumminello. The muscles that the hip abduction machine works "are primarily stabilizers for when you're standing or moving around. When you do a step-up or lunge, you're working them, plus all the other stuff," he adds.

Skip the hip abduction machine entirely and opt for standing exercises, suggests Aaron Brooks, a biomechanics expert and owner of Perfect Postures in Auburndale, Massachusetts. You can get similar benefits from exercises with a cable machine.

What to Do Instead: Cable Hip Abduction

A. Affix a band or the handle of a cable machine around right ankle and stand with the machine (or fixed point of the band) on left side.

B. Keeping an erect posture, lift weighted leg out and away from body to 3 o'clock. Return leg to starting position to complete the rep. Finish the set, then repeat on the other side.

What to Do Instead: Cable Hip Adduction

A. Affix a band or the handle of a cable machine around right ankle and stand with the machine (or fixed point of the band) on right side.

B. Keeping an erect posture, lift weighted leg in front of planted leg to 9 o'clock. Return leg to starting position to complete the rep. Finish the set, then repeat on the other side.

(Also better than the hip abduction machine? Doing these effective thigh exercises instead.)

The Smith machine — where the bar is locked into a sliding vertical plane — may be the most versatile bad-for-you piece of equipment in the gym, according to Brooks.

"Let's say you're doing a bench press. If someone extends their arms in front of them, one may be longer than the other. The machine doesn't account for this. So you overwork and strengthen a pre-existing dysfunction," explains Brooks.

The fixed path of the weight "forces the joint to move in a way that it may not want to move," he adds. This can lead to injury in the major muscles, or it may lead to weakness in the tiny muscles that protect you when you're doing movements in the real world — such as bending over to pick up a box or running in a crowded park.

Almost all the exercises you can do on the Smith machine (such as squats, bench presses, or overhead presses) are better done with barbells or dumbbells instead. But the machine's not without merit: Use the fixed bar at lower positions to perform inverted rows or as your support for incline pushups.

Wall Squats with a Swiss Ball

When you perform a squat with a Swiss ball pressed between your back and the wall, you're cheating yourself — and your butt.

"It takes the glutes completely out of the squat," says Mike Wunsch, performance director at Results Fitness in Santa Clarita, California. And like many of the moves on this list (and equipment such as the hip abduction machine), it's unnatural. "You're relying on the ball. If I take it away, you'll probably fall down," adds Wunsch.

Get the total-body strengthening effect of the squat — working your quads, hamstrings, core, calves, and butt — with a goblet squat.

What to Do Instead: Goblet Squat

A. Cup a dumbbell or kettlebell in front of chest with elbows close together.

B. Push hips back and bend knees to lower into a squat, keeping bodyweight in heels.

C. Press back through heels to return to starting position, and repeat. (Not seeing gains? Here's why it seems like your glute workouts aren't working.)

While not the worst moves you could do at the gym, kickbacks and overhead extensions don't work your triceps all that hard. Plus, they can easily go awry and wreck your elbows and shoulders, thus earning them a spot alongside the hip abduction machine and the Smith machine on this list.

For your triceps, try the close-grip bench press and incline push-ups, suggests Frisch. For both moves, though, your form is important: "You shouldn't feel it in your shoulders," he says. "Ninety-nine percent of people do these exercises wrong. They stop halfway down. Your elbows should almost be touching your sides," and you should lower your chest all the way to the step (or the bar all the way to your chest), he notes. If you can't, raise the step for your pushups or lower the weight on the bar.

What to Do Instead: Close-Grip Bench Press

A. Sit on a bench with a moderately heavy dumbbell in each hand, resting them on each thigh. Squeeze elbows tight to ribs and lower torso down onto the bench to lie faceup. Keep elbows pulled in tight to sides, palms facing inward. Press feet flat into the floor and engage core to start.

B. Exhale and press dumbbells away from chest, straightening arms overhead so elbows are in line with shoulders.

C. Inhale to slowly lower dumbbells back to starting position, pausing when dumbbells are just above shoulder height.

What to Do Instead: Incline Push-Up

A. Stand facing a bench, then place hands on the bench. Walk feet behind body until legs are fully extended. (This should look like a plank with arms elevated.)

B. Bend arms and lower chest toward bench to do a push-up.

The seated torso rotation will tone your abs through rotation, "but at the price of beating up on your spine," says Tumminello. "When you rotate your spine, your hips are designed to rotate as well," he explains.

Get the core-strengthening benefits of rotation without risking your back with standing cable chops.

What to Do Instead: Standing Cable Chops

A. Stand to the right of the high pulley of a cable machine and grab the handle with straight arms over left shoulder.

B. Keeping arms straight, pull the handle down and across body to right hip, twisting at the core and hips.

C. Return to starting position and repeat. Finish the set, then repeat on the other side.

"Because the load is on one end [instead of centered], there's tremendous strain on the knee — and most times, people aren't sitting in the chair properly. They're trying to generate more force by moving their pelvis," explains Brooks.

Instead, stick to functional movements. Even without weights, exercises such as lunges and squats (when done correctly, of course) will train your thighs better while working your butt and challenging your core. 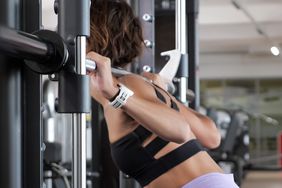 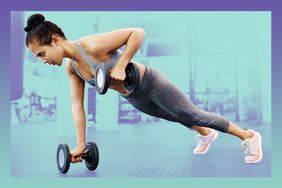 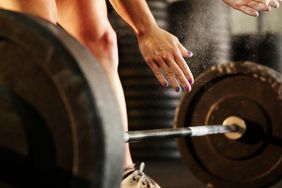 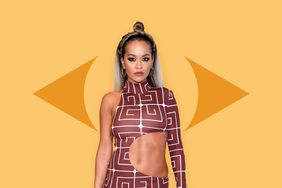 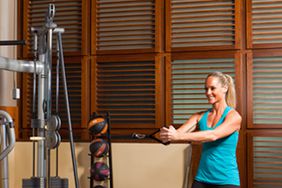 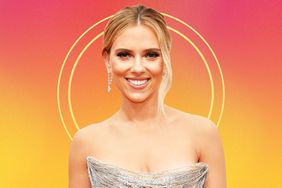 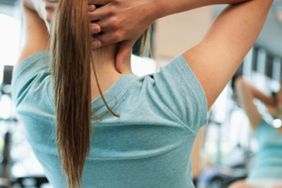 15 Exercises Trainers Would Never Do 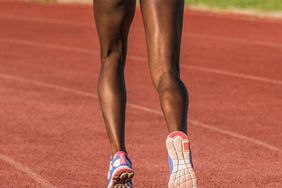 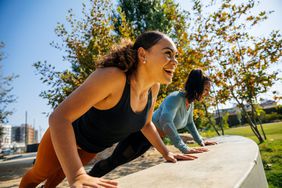 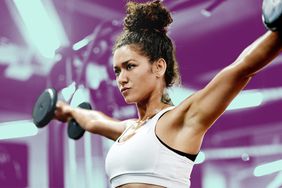 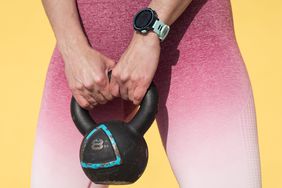 Trainers Reveal: The Best Total-Body Moves of All Time 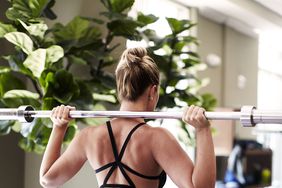