Plus, the pistachio nutrient facts that’ll have you cracking open a handful in no time.

The next time you're craving a crunchy snack, consider reaching for pistachios. They're delightfully earthy, creamy, and somewhat sweet, making them super satisfying to eat. But beyond their mouthwatering flavor and texture, pistachios pack a nutritional punch. Curious? Ahead, learn why pistachios are some the healthiest nuts you can eat.

Related to cashews and mangos, pistachios are the seeds of the pistachio tree, a plant that's native to western Asia and sprouts oblong fruits, according to a 2022 scientific review in the journal Plants. When the fruit is ripe, it develops a reddish hue and splits open to reveal a hard beige-colored (and inedible) shell, which contains a single green oval kernel, or seed — that's the part you eat. Botanically speaking, though, pistachio kernels aren't true nuts; they're actually seeds. (True nuts are hard dry pods that aren't surrounded by a layer of fleshy fruit, according to Harvard Health Publishing. Think: acorns or chestnuts.) Still, pistachios boast many of the same benefits and uses as other nuts, as you'll soon see below.

There's no other way to say it: Pistachios are nutritional superstars. They're teeming with disease-busting antioxidant compounds, along with protein, fiber, minerals, and vitamins such as folate, vitamin B6, and vitamin E, according to the aforementioned 2022 scientific review. Nuts and seeds in general are also packed with unsaturated fatty acids — and pistachios are no exception. Specifically, they're exceptionally high in heart-healthy monounsaturated fats (i.e. omega-6 and omega-9 fats).

When it comes to pistachio nutrition, it's important to note that the seeds are considered a source of complete protein. Meaning, they contain all the amino acids you need, says Valerie Agyeman, R.D., women's health dietitian and host of the Flourish Heights podcast. Need a refresher? Amino acids are the building blocks of protein, according to the National Center for Biotechnology information (NCBI). Your body can make most of the amino acids your body needs, with the exception of nine; these are called "essential amino acids" because you need to get 'em through food. Most complete proteins (which, again, contain all nine essential amino acids) are animal-based, such as eggs and chicken, but some plants (see: pistachios) fit in that category too. This means the crunchy green eat can significantly contribute to your protein intake, which is ideal if you're looking to fuel up on more plant-based proteins.

Here's the nutritional profile for 1/4 cup (1 ounce or 28 grams) of raw pistachios, according to the United States Department of Agriculture:

Want up your intake of antioxidants? Nosh on some pistachios, as they're a stellar source of antioxidant compounds such as B-carotene (the same stuff that gives orange and yellow produce their color), lutein, and tocopherol, according to registered dietitian nutritionist Maya Feller, M.S., R.D., C.D.N. They also contain chlorophyll, an antioxidant compound that gives pistachios (and plants in general) their greenish hue. Here's why that matters: Antioxidants, such as those in pistachios, can decrease inflammation and oxidative stress, which can be underlying mechanisms behind chronic diseases (e.g. type 2 diabetes and cancer), explains Feller. So, by eating plenty of antioxidant-rich foods such as pistachios, you can help reduce your risk of chronic conditions while supporting your overall health.

Pistachios might very well be your gut's new BFF. For starters, the seed contains both soluble and insoluble fiber, according to Feller. Soluble fiber form a gel when it comes into contact with H2O in the intestines, which firms up stool and, in turn, can reduce diarrhea. Insoluble fiber, on the other hand, bulks up the stool, potentially keeping constipation at bay, says Feller. The seeds also contain prebiotic fibers, which are "non-digestible carbohydrates that act as food for the beneficial bacteria in [your] gut," adds Feller. This improves the ratio of good vs. bad bacteria in your gastrointestinal tract, ultimately thwarting dysbiosis (an imbalanced gut), which can often be responsible for digestive issues such as inflammatory bowel disease, according to a 2021 scientific review.

While this health benefit of pistachios is surely a perk, keep in mind that you might experience GI upset (think: diarrhea and stomach cramps) after eating pistachios, says says Marissa Meshulam, M.S., R.D., C.D.N., registered dietitian and founder of MPM Nutrition. That's because they contain fructans, which are "sugars that can't be digested by your guts (but rather rely on gut bacteria to do the digesting, making you more gassy and bloated)," Melissa Majumdar, a registered dietitian and spokesperson for the Academy of Nutrition and Dietetics, previously told Shape. (

As mentioned earlier, pistachios offer healthy monounsaturated fatty acids, which are great for your heart, as they can help lower LDL ("bad") cholesterol, says Meshulam. "High LDL cholesterol increases the risk of heart disease and stroke, [but] eating a diet high in monounsaturated fats can lower your risk." Pistachios also contain potassium, a mineral that's "important for maintaining healthy blood pressure levels," says Feller. This can also help stave off heart issues, as high blood pressure is a major risk factor of heart disease, according to the Centers for Disease Control and Prevention.

If you're on a mission to keep hunger at bay, add pistachios to your rotation. "Pistachios are a wonderfully satiating food due to [their] high fat content," explains Meshulam. Basically, fat slows down the digestion of food, thus keeping you fuller for longer. The protein and fiber in pistachios lend a hand, too. "Protein works to [reduce] ghrelin, the hormone that tells you that you're hungry," notes Meshulam. "[Meanwhile,] fiber creates volume in the stomach, which helps promote the feeling of fullness." These satiating properties of pistachios can help you stay full and energized, making it easy to focus on everything else you have to do on busy days, says Meshulam.

"There are no known drug interactions with pistachios," notes Meshulam. Still, if you're new to the seeds, there are a few things to keep in mind. ICYDMI earlier, pistachios contain fructans, a type of carbohydrate also found in foods such as wheat, onion, and garlic. So you might want to skip the green eat you have a fructan intolerance.

You should also approach pistachios with caution if you have a history of tree nut allergies or are allergic to mangoes (which, again, are in the same fam as pistachios). That's because, albeit technically a seed, pistachios (like mangoes) are closely related to tree nuts, according to the American Academy of Allergy, Asthma, & Immunology. Signs of a food allergy include difficulty swallowing, an itchy mouth, stomach cramps, and nausea — all of which should warrant a call to your doc. You can also reach out to an allergist to get a better idea of which, if any, allergies you might have before eating pistachios.

How to Buy and Use Pistachios

Given the impressive health benefits of pistachios, it's not surprising that they're stocked at seemingly every store. At the market, you can find them with or without shells (the latter of which is for sheer convenience) as well as raw, roasted, salted, and unsalted.

"Pistachios naturally contain minimal sodium, while salted pistachios can contain around 130 milligrams [of sodium] per serving [about 1 ounce of 1/4 cup]," adds Meshulam. To put things into perspective, the recommended intake of sodium is less than 2,300 milligrams a day, according to the American Heart Association. So if you're watching your salt intake, consider opting for the unsalted varieties, suggests Agyeman.

Alternatively, you can roast and season pistachios at home. Not only does this allow you control the salt and other added ingredients, but it's also fun to do, says Agyeman. What's more, research suggests that the antioxidants in the seeds stick around even after roasting. Meaning, cooking (read: the heat) won't destroy pistachios' disease-busting benefits. Simply toss shelled raw pistachios with your favorite seasonings (e.g. paprika, rosemary, or cinnamon), then spread them onto a baking sheet in an even, single layer. Pop 'em in the oven for 375°F for ~10 minutes or "until they [are] light brown and give off a light nutty scent," notes Agyeman. If your oven tends to cook food unevenly, you can rotate the sheet halfway through. Let your homemade roasted pistachios cool before eating, then store any leftovers in an air-tight sealed container for about one week.

Similar to other seeds and nuts, pistachios are also frequently processed into different forms and sold as an oil, milk, or butter. Depending on how they're processed, the nutrient content of pistachio products can vary. For example, pistachio oil is often made by roasting and pressing pistachios to release the oil while pistachio milk tends to be the result of blending pistachios and water, then filtering out the pulp. In both cases, you're left with far less fiber than you'd find in the whole seeds. So, if you want to reap the health benefits of pistachios, consider eating the actual ingredient. (

The All-Inclusive Guide to Oat Milk vs Almond Milk

In terms of flavor, "pistachios are mild with a slightly sweet finish," explains Feller. So, if you're wondering, "what are pistachios good for?" The answer is quite simple: Anything. "They are an extremely versatile nut that go well with many dishes, both sweet and savory [alike]," adds Feller. Ahead, how to cook and bake with pistachios to start using the seed at home:

As a topping. Chopped pistachios, like other nuts, work wonderfully as a topping. Use them to garnish any food that could benefit extra crunch or flavor, such as soups, oatmeal, yogurt, or hummus.

In baked goods. Treat yourself to a pistachio dessert by adding the nut to banana bread or chocolate chip cookies. About 1/3 cup of chopped pistachios works well for most batters, though you can always add more on top.

As a crust. For a mouthwatering meal, try coating your fave protein in crushed pistachios. Finely chop 'em in a food processor or by hand to create a nutty alternative to breadcrumbs.

In salads. Make your next salad extra special with a handful of pistachios. The nuts will add flavor, texture, and protein to boot.

In pesto. Take a tip from Agyeman and use pistachios in your next batch of homemade pesto. Simply replace the pine nuts with chopped pistachios, and you'll have a totally unique (and delicious) sauce. 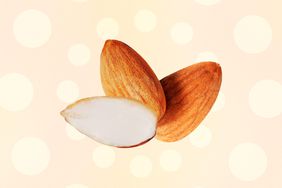 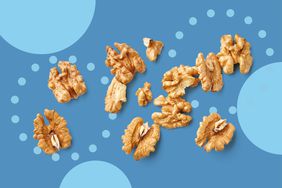 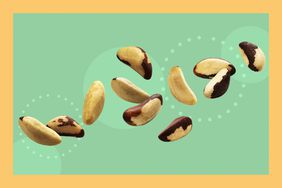 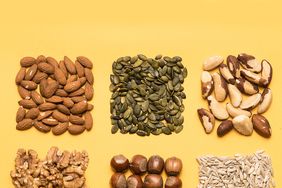 Is Farro Healthy, Really?
The Best Foods to Eat Together for Nutrient Absorption