Lauren Del Turco
Lauren is a freelance health and wellness lifestyle journalist and content strategist who has worked on-staff at Men’s Health, The Vitamin Shoppe, and most recently as the fitness and wellness editor of Women’s Health. With an educational background in English and creative writing from The College of New Jersey — and a lifelong passion for movement and outdoor recreation — Lauren’s work addresses health and fitness with compassion and expertise. As a certified personal trainer through ACE and a former group fitness coach, her hands-on experience and continued education in fitness inform her writing and editing to promote an active lifestyle for all. When she’s not up against deadlines, you’ll find Lauren hiking with her family, perusing the local farmer’s market, or on her yoga mat.
Shape's editorial guidelines

Yeah, yeah, you've heard that omega-3s are good for you about a thousand times by now—but did you know that there's another type of omega that's equally important for your health? Probably not.

Often-overlooked (but probably in lots of the foods you eat), omega-6s also have a major impact on your body. Here's what you need to know about these sneaky omegas and how to make sure your diet contains the right amount of them. (Before you get started, discover how much fat you should really be eating each day.)

First, a Quick Recap On Omega-3s

When it comes to the omegas, omega-3s get all the glory—and they do play a number of important roles in our health.

The two omega-3s you've probably heard of: EPA and DHA, both of which are found in fatty fish, like salmon, tuna, and sardines. One you may not hear as much about (because our body can't utilize it as efficiently): ALA, which is found in plant foods, like flax seeds, chia seeds, and walnuts.

"Omega-3s are known for their anti-inflammatory properties," says Brittany Michels, MS, RD, LDN, dietitian for The Vitamin Shoppe and Only Me personalized supplements. "Since many diseases stem from unmanaged inflammation, omega-3s can potentially reduce our risk of developing certain conditions."

According to Michels, omega-3s have been shown to support our health in numerous ways, including:

However, omega-3s are not the end-all, be-all!

Yep, You Need Omega-6s, Too

Though omega-6s get a bad rap (we'll explain in a sec), they also contribute to our health.

"Omega-6s are known for their pro-inflammatory properties," explains Michels. "While this may sound like a bad thing, many functions of the body—including protection from illness and injury—require pro-inflammatory responses."

Omega-6s also help you maintain healthy blood sugar and cholesterol and support our blood's ability to clot, according to Harvard Medical School.

You'll find these fats in soy, corn, nuts, seeds, animal products, and oils made from vegetables and seeds.

The downside: "Consuming more omega-6s than you need can actually contribute to excess inflammation in the body," says Appel. (This can worsen symptoms in people who have inflammatory conditions, like arthritis.) In fact, a high amount of omega-6 in cell membranes may be associated with increased risk of heart disease, she adds.

Here's the big fat problem: Because of the huge amounts of processed seed and vegetable oils in the standard American diet (they're in pretty much every processed food in the game), most people consume way, way too many omega-6s. (Since many of people don't consume much seafood, either, they also fall short on omega-3s.)

Like, three to five times too many omega-6s. The average person eats between a 12:1 and 25:1 ratio of omega-6s to omega-3s, says Michels.

To get your omega intake back in the right range, you've got to cut back on certain foods—and load up on others.

First, check food labels carefully for processed seed and vegetable oils (like soybean and sunflower oils) and cut out as many processed eats as you can, says Appel.

Then, swap out any oils you use at home for oils low in omega-6s, like olive oil. (Another reason: Olive oil might also help reduce your risk for breast cancer.)

From there, up your intake of omega-3s by consuming three servings of low-mercury seafood (remember, fatty fish!) per week, recommends Michels. You can also add a daily omega-3 supplement to your routine; just make sure to buy from a reputable brand who has a third-party test their supplements for quality. 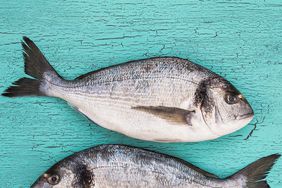 What Is a Pescatarian Diet and Is It Healthy?
The Best Foods to Eat Together for Nutrient Absorption