As far as healthy drinks go, chlorophyll water is new to the hype machine—but is this juice bar fav all it's cracked up to be?

If you've been in a juice bar, health foods store, or yoga studio in the past few months, you've probably noticed chlorophyll water on the shelves or menu. It's also become the healthy drink of choice for celebs like Jennifer Lawrence and Nicole Richie, who reportedly swig the stuff on the reg. But what is it, and why is everyone suddenly swearing by it? (Another hyped-up hydrator: alkaline water.)

Science time: Chlorophyll is the molecule that gives plants and algae their green pigment and traps sunlight for photosynthesis. You can eat it via lots of leafy green veggies, take it as a supplement in pill form, or add it to water or juice via chlorophyll drops. And you might want to do at least one of those things, because chlorophyll boasts a ton of supposed benefits.

"In addition to being nutritionally fabulous for you, chlorophyll is a detoxifier that promotes energy and weight loss," says Los Angeles-based holistic nutritionist Elissa Goodman "Chlorophyll binds with environmental pollutants including toxic metals, pollution, and certain carcinogens, and promotes cleansing, which in turn gives us more energy, mental clarity, and the potential for weight loss."

And that's not all. According to research out of Oregon State University's Linus Pauling Institute, chlorophyllin (which is derived from chlorophyll) has been used orally as a natural, internal deodorant (i.e. it treats bad breath and bad gas) and topically in the treatment of wounds for more than 50 years-without any serious side effects. Other research shows that chlorophyll is effective against candida albicans (which can lead to fatigue, depression, and digestive problems) and is potentially beneficial in cancer therapy. "Adding chlorophyll drops to your water promotes an alkaline environment for your body," adds Goodman, "which can reduce inflammation. Decreased inflammation, in turn, means a reduced risk for cancer."

That's a lot of hydration hype to live up to. So to see if chlorophyll actually earns its status as a superfood, I decided to drink it every day for two weeks-an arbitrary timeline based on how long I realistically thought I could do something every single day, especially while living my normal life (which would include a wedding and a weekend with my extended family). So, bottoms up!

Although Goodmen often recommends chlorophyll to her clients for "its ability to provide extra energy, improve overall well-being, and for its powerful antioxidant benefits," she says she's really picky when it comes to supplements. She swears by The World Organic's 100mg Mega Chlorophyll in capsule or liquid form. If taking the capsules, Goodman recommends taking up to 300mg a day; if you're trying the liquid chlorophyll, just add a few drops (a teaspoon at most) to a glass of water twice a day and sip at regular intervals. (She's also a fan of Organic Burst's Chlorella Supplements in tablet or powder form.)

I went the liquid supplement route, because I felt like I would get more bang for my buck (and sometimes taking pills upsets my stomach), and bought Vitamin Shoppe's Liquid Chlorophyll drops.

On the first day of my experiment, I meant to drink my glass of liquid chlorophyll first thing in the morning to get it out of the way, but I woke up late and had to race to work (Mondays, amirite?). I wish I had, though, in the event that it really does suppress your appetite-a coworker brought donuts to our morning meeting and I polished off two.

Instead, I waited until after work and poured eight ounces of into a glass and added the recommended 30 drops. The first drop turned the water really green. Like really, really green. I knew that it would be green (thank you, biology class). But if that's what one drop looked like, what would 30 drops look like? And more importantly, what would it taste like? Swamp? It looked like swamp. By the last drop, my glass of water was Wizard of Oz, Emerald City green. I grabbed a straw-mostly because I was still wearing the white blouse I wore to work and because all of a sudden I was terrified it wouldn't only stain my shirt, but also my teeth.

I took my first sip. Not bad! It was almost good! It tasted like mint, kind of like peppermint ice cream, mixed with chlorine and something else...cucumbers? It was weirdly refreshing.

It was difficult to drink quickly because I was still trying to figure out the flavor, and the color of the water was more than a little off-putting. But I managed to finish, checked my teeth (no stains!) and shirt (no stains!), and went off to dinner with friends.

I felt a little burst of energy for the next hour. But that could have been just because I was excited about the promises of this magic elixir and I was trying to hurry and get back home before The Voice started.

Goodman says some people feel a difference the day they start taking chlorophyll, while others might take up to five days to notice any changes.

I was feeling dehydrated and thirstier than I usually do. I'm not really good at hydrating-I only usually have two glasses of water a day, and it's always a New Year's resolution of mine to drink more water. Despite my inability to drink the recommended daily dose of H20, I don't usually feel thirsty. But I did this week.

Other than incessant dry-mouth, I didn't really notice much of a difference. I maybe felt like I had a little bit more energy. I also felt more full throughout the day-but I had pizza for lunch and dinner on Wednesday.

Another unsolicited compliment on my skin, this time from a different coworker!

This weekend, I went to a friend's wedding, where I had a few drinks and a good time. I was surprised at how refreshing the chlorophyll water tasted Sunday morning when I was feeling a little under the weather (I honestly thought it would make me feel a little puke-y after a night of wine and cocktails).

Before I left for the wedding on Saturday morning, though, I was rushing around the house trying to pack. Because I was rushed, I didn't mix the chlorophyll in as much water as I had been. Bad idea. The more concentrated the chlorophyll, the stronger/worse it tastes. A nice balance seemed to be 30 drops in about eight to twelve ounces of water, FYI.

One week down, and I haven't lost any weight. I was not so secretly hoping I'd be able to magically drop five pounds without doing anything besides drinking the water. No dice. I can, however, confidently say I feel more energized. And let's not forget my glowing skin!

Because I'm incapable of learning from my own mistakes, and because I'm naturally pretty curious, I put one drop of chlorophyll from the dropper directly on my tongue. (Also, journalism!) Again, terrible idea. Oh my god, was that disgusting.

Today, I ordered some premade chlorophyll water from the Pressed Juicery-it's the only store I could find online that makes chlorophyll water (with no additional ingredients) and ships to Michigan. This was not cheap. Hopefully, it would be worth it.

As for chlorophyll being an internal deoterant and topical treatment, while I didn't have any flesh wounds I could spray chlorophyll on to test the wound-healing claims, without going into too much detail, I can say that I did feel like I had worse breath and even worse smelling, um, the other thing. Here's hoping this changes.

My Pressed Juicery water arrived. It tasted almost the same as the water I've been making myself, but more diluted and less "green" tasting, which I definitely appreciated. Unfortunately, it's probably more cost-effective long-term to stick with the drops.

By the last day of my experiment, I was sipping chlorophyll water right out of the bottle (no straw!) and adding a dropper's full without meticulously counting each drops. I was a chlorophyll-water-drinking pro.

I lost exactly one pound, and I can confidently say I felt more energized, more satiated, the same amount of, um, digestion, and less internally deodorized. I do have quite a bit of the liquid supplement leftover, so I'll probably continue drinking chlorophyll water until that's used up-but after that, unless I feel or see any other dramatic changes, I'm not sure I'll buy it again.

The good news: Since natural chlorophylls are nontoxic, there are currently very few reported risks other than them causing your skin to become extra-sensitive to the sun (although, as with any supplement, you should definitely talk to your doctor before taking it). Goodman advises clients to start out slow and build up to the daily dosage to see how your body reacts. (Heads up: She also says you might notice greenish stool, but not to worry because this is a normal side effect. Fun!)

Not ready to commit to the supplement? Just make a conscious effort to include more leafy greens into your diet, and you'll reap the chlorophyll benefits. (Good news! We've got 17 Creative Vegetarian Recipes Using Leafy Greens.)

And if Jennifer Lawrence is spotted drinking anything else, I will try it. For journalism. Cheers! 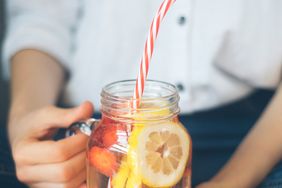 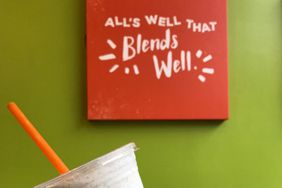 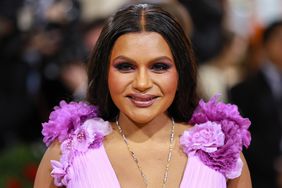 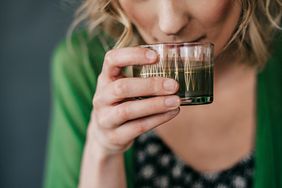 Liquid Chlorophyll Is Trending On TikTok — Is It Worth Trying? 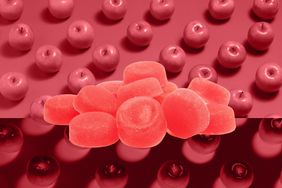 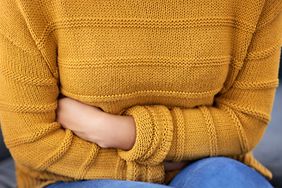 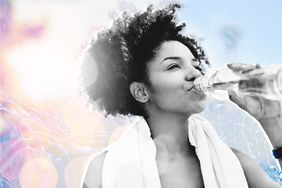 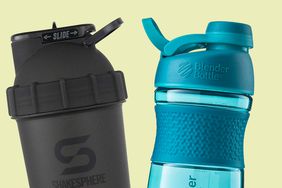 The 14 Best Shaker Bottles, According to Customer Reviews 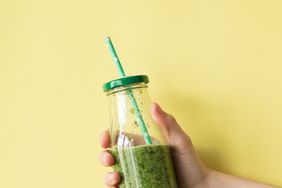