Unlike most chefs, I actually lost weight after graduating from culinary school. The key to shedding those 20 extra pounds? Knowing all the sneaky tricks professional cooks use to make their job easier and avoiding those that turn even seemingly healthful dishes into caloric minefields. It's no surprise to me that a Center for Science in the Public Interest study found that the typical appetizer, entree and dessert at a restaurant has 1,000 calories -- that's each, not a total for the entire meal.

Still, it is possible to eat healthy or even slim down while dining out, says Kathleen Daelemans, a West Bloomfield, Mich., chef who has maintained a 75-pound weight loss for nearly 13 years and is the author of Getting Thin and Loving Food (Houghton Mifflin, 2004). "You just need to be a forensic diner," she says. "Ask a lot of questions and make a lot of requests."

Here are seven common restaurant practices that can sabotage your diet and what you can do about them.

Shocker #1: Even steamed veggies are high in fat.

"Fat is what sells food in restaurants," says Deborah Fabricant, a Los Angeles-based restaurant consultant, former chef and author of Stacks: The Art of Vertical Food (Ten Speed Press, 1999). "That's why it's ubiquitous, even in vegetable dishes."

"I was required to sauté all my vegetables and to roast my potatoes in duck fat," confesses David C. Fouts, a chef and restaurant consultant based in Cardiff-by-the-Sea, Calif., who has labored behind the stove at a number of chic eateries in Los Angeles, including Wolfgang Puck's Granita in Malibu. "Every order of spinach I made got about 2 ounces of butter." That's 4 tablespoons, which adds 45 grams of fat (32 grams saturated) and 400 calories to a single side dish.

Grilled veggies don't fare any better. They either get an oil-based marinade or are brushed with oil before grilling and then rebrushed on the plate so they look prettier. Even steamed vegetables aren't safe. "I recently ordered steamed vegetables from room service at a New York City hotel," Daelemans says. "Sure, they steamed them. But then they tossed them in so much butter and olive oil that I would have been better off ordering a banana split."

Savvy-diner strategy Order your veggies steamed or grilled and make clear to your server that you want no butter or oil added at any stage of preparation.

If you've been to a fancy buffet brunch with an omelet bar, you've seen the chef generously ladle a clear liquid into the pan before making your mushroom-and-spinach favorite. The liquid is fat, and the ladle holds at least 2 tablespoons. That's 22 grams of fat (16 grams saturated) and 200 calories added to an otherwise healthful dish.

Sure, you can request "light on the oil," which might lead a chef to cut it down some, but cooking this way makes his job much more difficult. "A few chefs do use a cooking spray from time to time if they are really conscientious," Daelemans says. "But oil can withstand a higher heat than spray, so a chef doesn't have to monitor the food so closely."

Savvy-diner strategy Next time you're out to brunch, ask that your eggs be prepared without butter or any other kind of fat. Let your server know that you're aware the dish may not look as attractive as one that's practically been fried.

Shocker #3: Those "plain" toasted buns are covered in butter (or worse).

It's pretty obvious when you take a bite of garlic bread at a steakhouse that it's dripping with butter. But butter or other fat is added to bread a lot more often than you know. It's common practice to slap sandwich buns with some form of grease to keep them from sticking to the flattop grill. You may think you're having a plain grilled chicken sandwich, but there's a good chance those wheat buns were smeared with margarine before being toasted. This adds 5.5 fat grams (4 grams saturated) and 50 calories.

But that's not the end of it. The outside of the bread may be smothered in mayonnaise before it's toasted, says Fouts, who admits to making grilled turkey sandwiches this way at the tony restaurant where he last worked. "That's how bread gets that beautiful golden color," he explains.

Savvy-diner strategy Ask that your bun or bread be toasted "dry." When it arrives, check for signs of butter or other fat, and don't hesitate to send the plate back if you find any.

Italian marinara sauce is rich in antioxidants (thanks to the lycopene in tomatoes), but did you know it's also brimming with oil? Chefs love to go "glug glug glug" when preparing this hearty sauce. "A gratuitous amount of oil is often used to build this sauce, starting with the sautéing of the onions," Daelemans says. The oil could add as many as 28 grams of fat (4 grams saturated) and 250 calories to a 1/2-cup serving of sauce. And it doesn't stop there. "Often we cook marinara with the rinds of Parmesan or the end piece of a prosciutto to give it a richer flavor," adds Monica May, a private chef in Los Angeles who's run nightclub restaurants and cooked for numerous celebrities. "One Italian chef I worked with included butter in his tomato sauce because that's how it was made in his region of the country."

A plate of pasta and marinara may contain 1,300 or more calories and 81 grams of fat (24 grams saturated). That's before you even say "cheese."

Savvy-diner strategy At Italian restaurants, order fish grilled dry, a side of plain steamed veggies and a lemon for seasoning. If you're craving pasta, order an appetizer portion to share with your dining companion.

Shocker #5: Your "healthy" salad is drowning in oil.

Think ordering an entree salad will help you cut calories? In many cases you might as well be eating fast food. At least 1/4 cup of dressing is used to toss a salad, often more. That harmless-looking ladle of creamy dressing has 38 grams of fat (6 grams saturated) and 360 calories, about the same as a cheeseburger. But "creamy" isn't the only culprit, says May. "Most dressings are based on a 3-1 ratio: three parts oil to one part acid [vinegar], so even a balsamic vinaigrette has a high fat content."

Pasta salads, with their colorful broccoli florets and red pepper strips, also can be deceiving. A generous amount of oil is used when they're prepared. But to preserve that freshly made look, restaurants often add extra "coats" every few hours until they're served. By the time the salad hits your plate, the oil alone could add as many as 28 fat grams (4 grams saturated) and 250 calories for a 1/2-cup serving.

Savvy-diner strategy Ask for lowfat or fat-free dressing on the side, or dress your salad with a splash of balsamic vinegar or a squeeze of lemon juice. Avoid pasta salads or limit your intake.

Meat, chicken and fish get a fat rubdown before cooking. At culinary school it was drilled into us that before any piece of meat is cooked -- no matter how it's to be cooked -- it absolutely must be rubbed on both sides with olive oil. Rubbing a 4- to 6-ounce chicken breast, steak or piece of fish adds up to 10 grams of fat (2 grams saturated) and 90 calories. And if it stops there, you're getting off easy. "Some dishes are designed to have butter and oil play a large part in the taste profile," May says. "The famous Hollywood eatery Chasen's was known for its hobo steak -- a New York Strip cooked tableside in a quarter-pound of butter!"

Fouts divulges that while steaks are "holding" (waiting to be served) they are commonly immersed in butter to keep them from overcooking. Then, just before a steak goes out to your table, it often gets topped with butter or a sauce made from butter or cream.

Savvy-diner strategy Explain to your server you want your meat, chicken or fish grilled or broiled with absolutely no butter or oil.

Shocker #7: Sushi isn't as lean as it looks.

With its fresh flavors and beautiful, minimalist presentation, sushi must be diet food, right? Many of us seek it out specifically when we're in the mood for a meal that's lean. As a result, lots of dieters let their guard down at the sushi bar. Trusting that they've entered a safe-eating haven, they fail to detect the mayonnaise in California, spicy tuna and specialty rolls. It's particularly tough to notice the excess in California rolls because the white crab conceals the mayo. But it can add as many as 17 grams of fat (2 grams saturated) and 150 calories in just four pieces. Rolls made with American ingredients are always suspect. "You deserve all the fat you get if you order rolls with cream cheese," May jokes.

Savvy-diner strategy Don't be afraid to ask your sushi chef what's in your sushi; a good chef will be happy to tell you in detail. Your best choice is sashimi (pieces of raw fish). And skip any rolls with the word crispy in their description, a sign they're probably deep-fried. 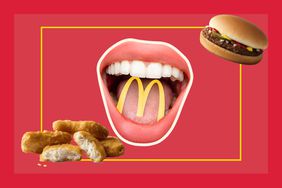 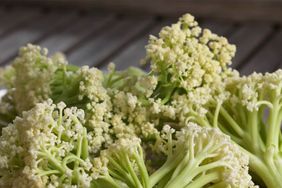 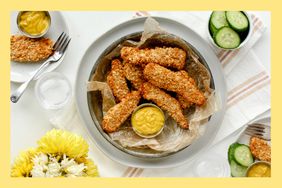 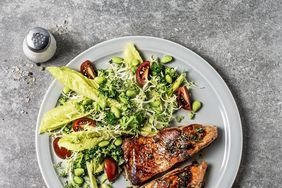 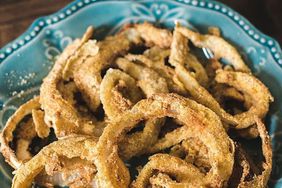 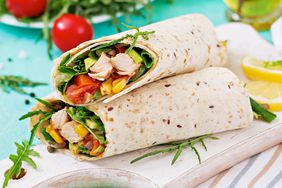