Is This the Next Greek Yogurt? 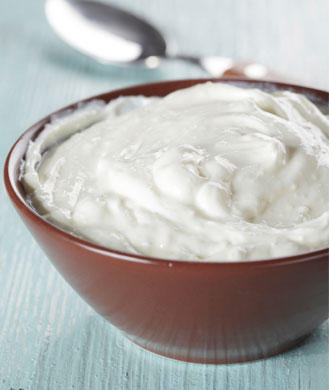 Unless you haven't been in the dairy section of a grocery store in a long time, you know that Greek yogurt is all the rage. With 20 grams of protein per serving and a creaminess that makes it seem more indulgent than it really is, Greek yogurt is a weight-loss staple.

But now there's another yogurt from Europe trying to steal our hearts (and mouths and stomachs) away: Swiss yogurt.

While the Greek style is made from milk that has had some of the water removed or from straining the whey from plain yogurt to make it thicker and creamier than traditional yogurt, Swiss yogurt (also called stirred yogurt) is made from cultured milk that is incubated and cooled in a large vat, then stirred to give it a thinner, creamier consistency than its Mediterranean counterpart.

Because tangy Greek yogurt stands up to heat better than many other yogurts, it's great for cooking. It also makes a good substitution for sour cream and is often used in dips. Lighter, sweeter Swiss yogurt is better eaten as-is, in cold beverages, or in desserts.

How do they stack up from a nutritional standpoint? For comparison's sake, let's look at My Essentials Nonfat Plain Swiss yogurt and Fage Total 0% Plain Greek yogurt.

You can see that while both brands include a hefty dose of protein and the same calorie count, the Swiss yogurt contains more sugar and carbs. Moreover, Swiss yogurt tends to be (but isn't always) pureed with fruit. This gives it a sweet taste—but also ups the sugar content, so those of you concerned about sugar or carbs may be better off enjoying Swiss yogurt as an occasional dessert instead of a regular snack.

Bottom line? It's important to choose a yogurt that fits into your lifestyle. If you can't bear the thought of giving up your beloved Greek yogurt, try one of these 10 recipes that uses the versatile superfood. If you're interested in trying the Swiss yogurt, check out the parfait recipe below for a quick and easy snack or dessert, provided by Emmi.