I've been the sports nutritionist for three professional teams and numerous athletes in my private practice, and whether you head to a 9-5 job each day and work out when you can, or you earn a living exercising, the right nutrition plan is the real key to results. Here are five mistakes that may interfere with getting the most out of your training time:

Drinking a Protein Shake Before a Workout

Protein is digested much slower than carbs, so too much pre-workout can give you stomach cramps and prevent the carbs you need for fuel from getting absorbed and becoming available to your working muscles.

The Fix: Reach for a smaller quantity of protein, along with slow burning carbs pre-workout, and choose higher protein shakes, snacks or meals afterwards.

Exercising on an Empty Stomach

It's physiologically impossible to burn pure body fat - during aerobic exercise you burn a combo of carbs and fat. When carbs aren't readily available, your body is forced to break down its own muscle mass and convert it into blood sugar. That means by skipping a meal, you may end up eating away at your own muscle instead of building it!

The Fix: If you don't like the feeling of food in your stomach when you exercise stick with a liquid, like a small smoothie made with unsweetened frozen fruit and organic skim or soy milk.

Overusing them can cause you to "eat back" the calories you burned exercising, preventing you from seeing results. A lot of my non pro athlete clients grab a bar post workout and eat a meal a few hours later, which may be overload when you consider that many bars are the equivalent of a turkey sandwich - and most people wouldn't eat a turkey sandwich, then sit down to chicken stir fry a few hours later.

The Fix: If you're going to eat within an hour of the end of your workout, skip the bar, or go for it and pare down the portions in your next meal.

Every cell in the human body is partially made out of fat, including muscle, so "good" fat is needed to heal and repair post workout - without it you can stay sore and fail to see an improvement in strength and muscle tone.

The Fix: Include small portions of foods like extra virgin olive oil, avocado and almonds at every meal, and be sure to include a daily source of omega 3 fatty acids

Buying Into the Afterburn Myth

While it's true that you will torch more calories in the hours after a workout, for most women it amounts to just an additional 50 calories burned, not enough to sanction a splurge (note: a medium original Pinkberry = 230 calories).

The Fix: My general rule of thumb: the 50/50 principle - if you're trying to trim down you can afford to add about half the calories you burn to your usual intake, preferably about 50 percent before to help fuel the activity, and half after, for recovery. For example, an hour on the elliptical burns about 500 calories (for 150 pound person), which means you can safely "spend" an extra 125 calories both before and after hitting the gym - that's the amount in about one slice of whole grain bread spread with one tablespoon natural peanut butter before, and a half cup each nonfat Greek yogurt and sliced strawberries topped with a tablespoon of sliced almonds after. 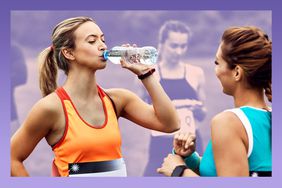 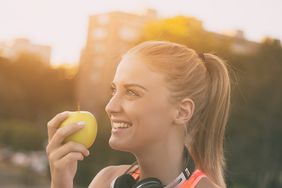 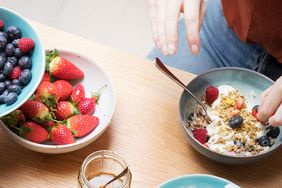 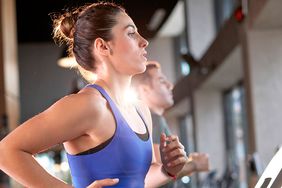 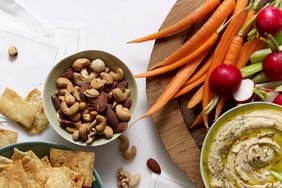 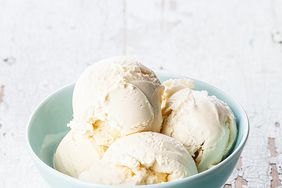 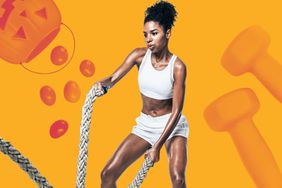