According to a new study, snacking continues to increase among Americans, and now accounts for more than 25 percent of today's average calorie intake. But is that a good thing or a bad thing when it comes to obesity and health? The truth is it depends on how you do it.

This particular study looked at Americans' eating habits between the 1970s through today and found that in that time snacks have really grown into what the researchers call "full eating events," or a fourth meal, averaging about 580 calories each day. It also found that we spend more time snacking. Just in the past few years the time spent eating breakfast, lunch and dinner remained consistent at about 70 minutes per day, but time spent snacking doubled, from 15 minutes each day in 2006 to nearly 30 minutes in 2008. And some of the most important data in this study was about beverages. Time spent drinking jumped nearly 90 percent and beverages now account for about 50 percent the calories consumed through snacking.

The trouble with drinks is that many people don't think of them as food, when in reality a coffee drink, bubble tea, smoothie or even a large soda or sweetened iced tea can pack as many calories as something like a donut or even a sandwich. But after downing a caloric drink you're less likely to compensate by cutting back on your solid food intake.

So does this mean you shouldn't snack? Definitely not. Nearly 100 percent of Americans in all age groups eat a snack each day, and that's actually a good thing, because it's an opportunity to broaden your nutrient intake. Most Americans fall short on fruit, vegetable and whole grain servings, and snacks are a great way to fill the gap. So it's not about cutting back, but rather choosing healthier options like a banana with almonds instead of cookies or veggies and hummus instead of chips and dip.

And when it comes to smoothies, make them yourself, so you can control exactly what and how much goes into it. Here are a few rules for constructing them right:

1. Use fresh or frozen, unsweetened fruit - in some smoothie shops the fruit is sitting in a bath of sugary syrup. If you use fresh fruit throw in a handful of ice.

2. Add nonfat yogurt, skim milk, organic silken tofu or a milk alternative with protein like organic soy milk. Protein has been shown to help rev up metabolism. And an all fruit smoothie, especially if sugar is added, can leave you hungry again in just a few hours. This addition also broadens your nutrient intake to include calcium and keeps you fuller longer - even with fewer calories.

3. Add a small amount of a healthy fat like a few tbsp of almond butter, a tbsp of flaxseed oil or even fresh avocado. Fats are very satiating, so when you include fat in a smoothie it feels more sated - once again even with fewer calories. And fats boost the absorption of some of the most important antioxidants, some research shows by at least 10 times.

4. Toss in some natural seasonings like fresh grated ginger, mint leaves or dried, ground cinnamon or cardamom. In my newest book I refer to herbs and spices as SASS, which stands for Slimming and Satiating Seasonings. That's because these natural wonders not only add flavor and aroma to every meal - studies show that they pack a pretty powerful 1-2-3 weight loss punch. They help you burn more calories, boost satiety so you feel fuller while slimming down and are packed with antioxidants, which exciting new research has linked to lower body weights, even without eating fewer calories.

5. And finally if you think a smoothie may be more than you need as a tie-over snack, invest in some popsicle molds, pour the smoothie in and freeze. It creates a portion-controlled snack that you can grab and go and they take longer to eat! 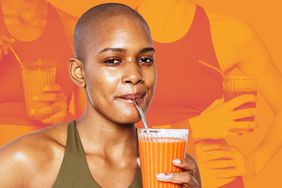 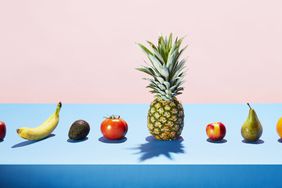