3 Hours to a Changed Life

One week after I completed my first triathlon, I took on another challenge requiring guts and strength, one that made my heart pound as if I were sprinting for the finish line. I asked a guy out on a date.

Just five months ago, the mere idea of opening myself up to rejection made my knees quake and my hands sweat (kind of like the thought of doing a triathlon once did). So where did I get my nerve? After staring at the phone and rehearsing what to say, I motivated myself with one phrase and started dialing: "If I can swim a mile in the ocean, I can do this."

I was never the most athletic type. I did play high school field hockey, but I spent more time on the bench than in the game. And while I dabbled in 5Ks and bike rides, I never considered myself a "real" athlete. Triathlons, though, always fascinated me. The focus! The endurance! The way the competitors looked like slick, spandex-clad action heroes as they ran out of the water. So when the opportunity came to register for a tri that involved a 1-mile swim, 26-mile bike ride, and 6.2-mile run on behalf of Team in Training, the fundraising arm of the Leukemia & Lymphoma Society, I signed up on impuls-even though I didn't know how to swim.

My friends, my family, and even my doctor went a little slack-jawed when I told them about my plans. I realized it all sounded a bit crazy. It was crazy. I would lie awake in bed picturing the different ways I could drown or how I might falter before reaching the finish line. I knew it would be easy to let the fears take over, so I made silencing those "what if" voices part of my training plan. Besides banning the thoughts from my own head, when my family barraged me with questions and worst-case scenarios, I told them I didn't want to hear it.

In the meantime, I suffered through "brick" workouts- back-to-back sessions, such as biking then running-in pouring rain and 90-degree heat. I choked on water during swim lessons and had a mini panic attack during my first openwater swim. When I spent my Friday nights resting up for 40-mile bike rides on Saturday mornings, I realized I had finally become a "real" athlete.

The day of the race I stood on the beach hyped up on a mixture of terror and excitement. I swam. I biked. And as I ran up the last hill, a finisher shouted, "One more right turn and you're a triathlete!" I almost burst into tears. I crossed the finish line feeling shock, awe, and pure exaltation. Me, a triathlete!

That nerve-racking phone call after the race was just the beginning of my intrepid new attitude. I've stopped running through the mental list of reasons I can't or shouldn't do something. "If I can swim a mile in the ocean..." is my mantra. The phrase steadies me and acts as a reminder to my unconfident self that I am more capable than I ever realized. Succeeding in the triathlon has also reset the bar for "crazy": I've moved on to considering gutsier undertakings, like traveling solo in South America for a few months. And although the guy I called ended up turning me down, I wouldn't hesitate to ask another guy out-it's a small feat compared to the half Ironman (a 1.2-mile swim, 56-mile bike ride, and 13-mile run) I've signed up for. 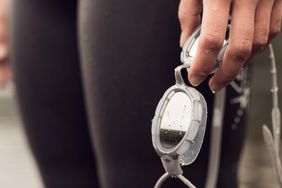 You're Just 8 Weeks Away From Crushing Your First Mini Triathlon