Your doctor should be the first person to know that you take Saint Johnswort to boost your mood or are thinking about starting a family. Why? Your well-being depends on your being upfront with your M.D. about everything including details about your lifestyle and symptoms you may think are insignificant. No amount of physical poking or prodding is going to give your physician a complete picture of your health you have to speak up, says Susan Spear, M.D., senior vice president of medical affairs for Executive Health Exams International, a New York City-based rm that specializes in preventive health.

The trouble is, 40 percent of women don't tell their doctors everything they should, according to a survey at the Center for Bioethics at the University of Pennsylvania in Philadelphia. Of course, being embarrassed to fess up to less-than-stellar habits including occasional cigarette use, which is the health habit women are most likely to hide is one reason why. But sometimes women simply don't realize which symptoms and lifestyle behaviors are important enough to mention. Here, the eight most common omissions patients make and why discussing them with your doctor can be a real lifesaver.

Am I Normal? Your Top 6 Sex Questions Answered

1. You take supplements and herbal remedies.

Why it matters: Many herbal remedies and supplements can and do interfere with the effectiveness of prescriptions and over-the-counter medications, says Joseph Boullata, Pharm.D., adjunct professor of pharmacology at the University of Pennsylvania School of Nursing. An interaction is possible in nearly one out of three patients taking both a medicine and a supplement, he says. For instance, calcium can reduce the absorption of a number of medications, including thyroid hormones and the antibiotic tetracycline. Saint Johnswort, an alternative herbal remedy for depression, significantly reduces the effectiveness of oral contraceptives and may be harmful when used in combination with some anti-depressants and migraine treatments. Chasteberry (also known as vitex), an herb used to quell PMS, can interfere with the action of birth-control pills.

2. You want to get pregnant later this year.

Why it matters: Unplanned pregnancies can adversely affect your health and the baby's. If you're low on folic acid, for instance, your baby is at risk for neural-tube birth defects like spina bifida (an incomplete development of the brain, spinal cord or their protective coverings). You need 400 micrograms of folic acid a day for three months before you even try to conceive, says Shelly Holmstrom, M.D., assistant professor of obstetrics and gynecology at the University of South Florida in Tampa.

Sharing your plans with your doctor may also help her spot easily treatable causes of infertility such as thyroid abnormalities (detected with a blood test) early on. Your M.D. can also determine if it would be better for you to lose or gain a few pounds before getting pregnant. Being 15 percent above your ideal weight increases the risk of gestational diabetes and high blood pressure, but being too slender can lead to problems too. Women who have a body mass index under 20 have a greater risk of premature delivery, Holmstrom says.

Why it matters: If your doctor knows you smoke any amount she's going to be more alert for conditions like bronchitis or elevated blood pressure, which can occur even in young women, because the nicotine in cigarette smoke constricts your blood vessels, says Douglas E. Jorenby, Ph.D., director of clinical services at the University of Wisconsin Center for Tobacco Research and Intervention in Madison. If nothing else about your health has changed except your blood pressure, its probably from the nicotine.

Women who indulge only occasionally often don't even realize that those two or three cigarettes a week can impact their health. There's no safe level of smoking, Jorenby says. Cigarettes contain more than 50 cancer-causing agents, and even limited exposure causes cellular mutations that can increase your risk of lung cancer. And if you're lighting up, chances are you're hanging out in smoky areas where you're being exposed to secondhand smoke as well which, ironically, has an even greater concentration of some chemicals than the stuff you puff into your own lungs.

Why it matters: Pain during intercourse is one of those concerns that women often keep to themselves, either because they think its normal or because they cant even bring themselves to blurt it out to their best friends, much less to their doctors. But sex should never hurt. There are many possible causes of the pain, and the majority of them are manageable, but your doctor may not be able to diagnose them unless you tell her you've been uncomfortable, Holmstrom says. Be as specific as you can, because exactly where it hurts is essential to determining an underlying cause. Pain deep in your vagina, for instance, is more likely to be caused by fibroids (benign tumors), endometriosis (a condition caused when benign uterine tissue grows in the ovaries, fallopian tubes and abdominal cavity), or pelvic inflammatory disease (a complication of a chlamydia infection that can, if left untreated, result in infertility). If your pain is more shallow or closer to the entrance of your vagina, it could indicate a yeast or bacterial infection or lack of lubrication during intercourse, resulting from hormonal changes or not enough foreplay.

5. You love to use tanning beds.

Why it matters Indoor tanning is as dangerous as sitting in the sun, says James Spencer, M.D., a dermatologist in St. Petersburg, Fla. If your doctor is clued into your bronzing habits, shell recommend that you establish a relationship with a dermatologist so you can have annual skin checks, Spencer says. Because tanning beds emit ultraviolet light similar to that of the sun, using one puts you at increased risk for all three types of skin cancer: basal cell carcinoma, squamous cell carcinoma and melanoma, the deadliest. In one study of more than 100,000 women, Scandinavian researchers found that regular tanning-bed use raised the odds of developing melanoma by 55 percent.

6. Your knees feel stiff in the morning.

Why it matters: You're certain you just overdid it at the gym and chances are you're right. But if its been a few weeks since your last tough workout and you're still stiff, that could be a red ag, Spear says. You may just have a low-grade virus, but stiff knees can also indicate some form of arthritis, including rheumatoid, she says. This autoimmune disease causes chronic inflammation of the joints and often surfaces in the 30s. Other symptoms include fatigue, lack of appetite and a low-grade fever. Depending on what she sees during your physical exam, your doctor may run a blood test to look for abnormal antibodies (they're present in 80 percent of people with rheumatoid arthritis), take an X-ray of your joints or send you to a rheumatologist for further evaluation.

7. You occasionally get an irritating cough that lingers for several weeks.

Why it matters: Annoying, but harmless, you may think. Its probably hay fever. Maybe, but mention it to your physician anyway, Spear urges. A cough can be caused by everything from asthma to reactive airways (an allergic reaction that often follows an upper-respiratory infection) to bronchitis to, less commonly, lung cancer. To determine what's behind yours, your doctor might want to do a chest X-ray to evaluate your lungs, heart and chest wall. Most chronic coughs are treatable, so if you don't mention it, you're missing a golden opportunity to feel better fast, Spear says.

Why it matters: Whatever concern you have, by prefacing the discussion with an explanation of how you feel, you'll get your doctors attention and probably her understanding as well. Raise the subject by saying, I'm embarrassed to talk about this or I'm afraid you're going to be angry about this, but I think it might be important for you to know, suggests Robert Arnold, M.D., director of the Institute for Doctor-Patient Communication at the University of Pittsburgh. Remind yourself too, that is what your doctor is there for and what you're paying her for, he says.

Still feeling nervous? Remember, that there's nothing you can say that they haven't heard before what you may find totally mortifying isn't to them. And ask yourself, What is the worst thing that could happen if I tell my doctor? You'll realize that she isn't going to do anything horrible, says Arnold. The worst shed do is yell at you and if that happens, you need to ask yourself if thats the kind of doctor you really want.

16 Things That Can Sink Yours (or His) Sex Drive
Was this page helpful?
Thanks for your feedback!
Tell us why!
Related Articles

What's the Deal with Period Poops?
What Is Magnesium Good for, Exactly?

7 Possible Causes of Fingernail Pain and How to Treat It 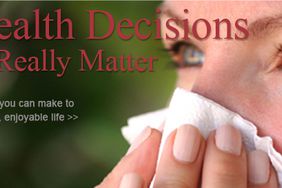 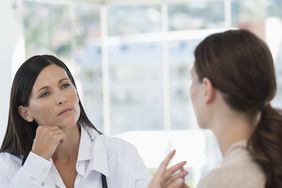