On any given day, the younger girls [13- and 14-year-olds] can be found throwing up breakfast and lunch in the school washroom. It's a group thing: peer pressure, the new drug of choice. They go in groups of two to twelve, taking turns in the stalls, coaching each other through it. . .

"In my group of friends, we are addicted to the five-pound-less syndrome.' Five pounds less is always better. I must admit, I've done it all to lose weight. I've fasted for ten days straight [sic], overdoused [sic] on laxatives, exercised more hours than not, ate lettuce at 6 p.m. just to throw it up. I know I'm sick, but I keep most of these things secret. Two of my friends know because their [sic] sick too. We have starving contests, see who can weigh the least next week . . . .

"I hate to say it, but it is the exceptional girl who isn't anorexic or bulimic, in my school anyways. This is normal. I am normal and my friends are normal. We're the women of the future."

What you've just read is from a 7-year-old -- no name to reveal her identity; no "dear or sincerely" to tack down her presence, no return address to invite an answer. We could have just thrown the letter in the trash. But what would we do with all the others like it-the thousands of responses that came in when we called all girls between the ages of 11 and 17 to answer our body-image survey?

For all the trials and tribulations you and I may have suffered, today's ride through adolescence is chillingly more intense. While those soul-searching hitchhikes of summers past now whiz by in a cyberblur on the information superhighway, one's next-door neighbor might just be making bombs behind the barbecue pit. Yes, we as teen-agers may have anguished over having sex, but modern girls worry about dying from it. And though crime is nothing new, did we ever sit in class wondering whether the guy at the next desk had a loaded gun under his baggy pants?

Finally, this is a time when 9-year-olds count their calories faster than their allowance, and eating disorders are as ubiquitous as Levi's. A time, too, when some teens, in their impatience to attack the bodies they hate, bypass spoons and forks, going right for the knife. "No one wants to talk about self-cutting, but girls do it," says Peggy Orenstein, author of SchoolGirls: Young Women, Self-Esteem and the Confidence Gap (Doubleday, 1994), who discovered that one of her 8th-grade subjects was scarring herself with razor blades and cigarette lighters. "It's a way to act out your anger on your body. I'm out of control."

Where have all the young girls gone? Instead of growing up like flowers blooming, it seems they are blown out of childhood's garden like cannon shot. Naturally, once in flight, they ball up to avoid the violence.

Fifteen is the age where all you can do is wait for life to get better while everyone around you won't even try to understand how bad it sucks.

Aware of the growing crisis, we at Shape hooked up with the nonprofit Melpomene Institute in St. Paul, Minnesota, known for its research on physically active females. Together, we designed a study that would probe the cavity of a girl's life where, for some, body image starts to rot and contaminate overall self esteem, while for others, physical and emotional confidence remains high. Why the difference? We wanted to know. Could we learn to derail the destructive process and prevent some of the obsessions about food and weight that we as adults suffer from? Almost 3,800 responses and several months of evaluation later, we do have some answers. But first, let's take a teen's-eye view of the surrounding data.

Meet Cory (not her real name), a 16-year-old from a small town in Michigan-the kind of girl who marks her survey with a smiley face, has a boyfriend, and sure, she's abused laxatives. ("More girls than you might think are doing it," says Cory over the phone. "The worst ones show up. People like me, no one notices.") In her opinion, the problems start with teen girls because, "We can't allow ourselves to be who we really are, so we start feeling like that person we're hiding isn't worth anything. Without something to convince us we're needed, we're lost. And lost is a scary place to be. So for whatever crazy reason, we get to thinking that being beautiful, being perfect, being in control will give us what we're looking for."

Many girls around age 11 or 12 start silencing their voices and losing their courage-the guts to speak one's mind straight from the heart-according to the pioneering work of Annie G. Rogers, Ph.D., and Carol Gilligan, Ph.D., who along with others at the Harvard Project on Women's Psychology and Girls' Development have been studying adolescents for 20 years. At this time, say the researchers, teens often go "underground" with their real thoughts and feelings and start to water down their speech with "I don't know."

There's not a lot of motivation for young girls. It's never, "OK, you can do it." It's always, "Let your brother do it." It's deadly.

In 1991, a groundbreaking study by the American Association of University Women (AAUW) showed just how far self-esteem plunges as girls make their way through their teens, especially among whites and Hispanics: 60 percent of elementary school girls said they were always "happy the way I am," but only 29 percent of high schoolers reported the same - a drop that reflects a widening gap in confidence between the sexes, considering the boys only fell from 67 percent to 46 percent. Meanwhile, the study also found that while young men name their talents as what they like most about themselves, females base their worth on physical appearance.

"We figured when we began that things would be different 20 years after Title IX, civil rights, and with greater numbers of women now making it into medical and law schools," says Anne Bryant, executive director of the AAUW. "But although girls and boys earn similar grades-girls may even do better-the messages they're getting from society, magazines, TV, peers and adults is that their worth is less and that their worth is different than that of the young men.

Question: What things make you feel good about how you look?

Answer: When I run five miles and can skip lunch.

Q: What things make you feel bad about how you look?

Certainly, the modern teen-age girl learns to measure her worth on the scale-the lower the number, the higher she scores. And with calories and fat grams now printed on most grocery items, she literally feeds on the math of bodily subtraction. The National Institute of Mental Health estimates one percent of adolescent girls develop anorexia nervosa and another two percent to three percent of young women become bulimic. But those statistics refer to the most severe clinical conditions; from all accounts, disordered eating has infiltrated just about every high-school cafeteria.

Catherine Steiner-Adair, Ed.D., director of education, prevention and outreach at the new Harvard Eating Disorder Center, sees eating disorders as developmentally "adaptive" responses to a culture that test a young girl, "Lose five pounds and you'll feel better," while pressuring her to starve herself emotionally in order to get ahead.

From childhood, explains Steiner-Adair, a female is taught to rely heavily on acceptance and feedback from others and to form her identity within the context of relationships. But during adolescence she is expected to shift gears into a "self-made" approach, becoming totally independent from people the way men are socialized to be--if she wants to gain some control by climbing the career ladder.

In one study, Steiner-Adair separated 32 girls, ages 14 to 18, into two groups: Wise Woman teens could identify the cultural expectations but still keep their focus on the importance of relationships as they sought self-fullfillment and self-satisfaction. Super Woman girls seemed to associate thinness with autonomy, success and recognition for independent achievement, striving to become something superlative -- a famous actress, fabulously wealthy, a corporate president. Though many of the girls were concerned about their weight, Steiner-Adair found that only the Super Women girls were at risk for eating disorders.

Everyone tells me my older sister is gorgeous -- she's anorexic and bulimic.

Obviously, not every 13-year-old has an eating disorder, much less signs up for the Bulimia Club, but the image of mass vomiting seems to aptly describe a post-X generation of young women who are purging their inner convictions and confidence-grabbing on, instead, to the fragile branches of appearance in the frantic uphill scramble to womanhood. Too often, the branches break.

"We need to believe we're worth it, that we don't have to be perfect, that we just have to be who we are," Cory says. "But you could skywrite that and still not make people understand. . . .I still wish I were thinner. I still binge occasionally, and for some reason I can't make myself throw out the last of my laxatives," she adds.

Ultimately, none of us can overturn the culture single-handedly, but the results of our body-image survey show that as individuals, we can make small changes that do add up. Even if we help one girl remember her own words and feel confident about her body, that'll be one less to disappear from our next generation.

I have no concept of what I look like. Some days I wake up and feel like a big old blob. Sometimes I feel fine. It's really overtaking my life, the whole body-image thing. 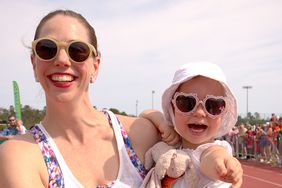 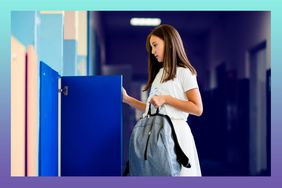