This month's full moon lights up your most passionate desires and illuminates underlying power struggles.

Every year, Libra season — which spans between September 22 and October 22 — offers us a chance to nurture our most important one-on-one relationships. After all, the air sign is ruled by Venus, the planet of love and beauty, and rules the seventh house of partnership. It's also a time to strive for balance. But as Libra's moment in the sun comes to a close, a full moon will occur in its opposite/sister sign Aries, the first sign of the zodiac that's all about winning.

A push-pull between partnership and self, as well as a focus on control issues, will be felt in the days around the annual, cardinal fire sign-hosted lunar event, which is exact on Wednesday, October 20 at 10:56 a.m. ET/7:56 a.m.

Here are all the details and how you can best navigate the Aries full moon.

Whether you're encountering ragey drivers, noisy neighbors, or simply finding yourself in the midst of a total WTF moment, full moon energy can spur lots of wacky behavior. But the real dilemma here is that full moons turn up the volume on your emotions — especially the kind that have been neglected and require addressing, stat. For that reason, full moon drama often stems from people projecting — or, more healthfully, opening up about — their pent-up pain, stress, or trauma.

Full moons are also culmination points of regular astrological cycles. Just like your fave Netflix binge, you have various "plots" going on in your life at any given moment, and whichever story began around the corresponding new moon (the opposite of a full moon, when the celestial body isn't illuminated by the sun from our vantage point and appears completely dark) in the same sign might reach its natural conclusion. For instance, this October 20 full moon in Aries is linked to the April 2021 new moon.

Full moons tend to be intense — especially so if they're hitting your natal chart in a significant way — but they often serve as valuable checkpoints for looking at deeply-felt emotions and putting the finishing touches on one story before you begin another.

Fire sign Aries, symbolized by the Ram, is ruled by gung-ho Mars, the dynamic planet of energy, action, aggression, and sex. The sign also serves as the ruler of the first house of self, appearance, personality, approach to life, and early childhood. So it's no surprise that Aries are known for being extremely driven, speedy, direct, bold, impulsive, and almost childlike in terms of being innocent or playful. Innately competitive and often athletic, people with strong Aries placements (meaning you have a couple or more personal planets in the sign) are perpetually striving to feel that they've "won" or have come in first at whatever it is they're involved in — be that a game or a conversation. In fact, they'll actually purposely seek out opportunities to debate or spar with others. Aries is also a cardinal sign, best known for big-picture thinking and project initiation.

Fittingly, the fire sign's full moon has also been referred to as the Hunter's Moon, according to the Old Farmer's Almanac, because as Native Americans prepared for months of cold ahead, they saw this moon as the signal to gather meat for winter.

Aries full moons tend to fuel your inner go-getter with assertive, impulsive energy — which, when taken a bit too far, can result in arguments, anger, or aggression. After all, the combination of an already dramatic, emotional full moon and a passionate, driven, competitive sign like Aries can be volatile.

It's also important to consider the aspects around any full moon. This year, the moon will oppose the very planet that rules it: Mars, which is currently moving through the later degrees of peace- and balance-seeking Libra. This super-action-oriented opposition can make you feel a sense of urgency and determination to do whatever it takes to see that long-held desires are fulfilled yesterday.

If that wasn't enough, the moon also forms an activating square to transformative Pluto in industrious Capricorn, presenting challenges that could lead to growth. Pluto oversees power and control, among other things, so this lunar moment could have you contending with deep-rooted emotions, increased awareness around toxic patterns, and power struggles.

That said, should you find yourself in the midst of a confrontation — particularly one that pops up out of nowhere — be sure to consider what it's actually rooted in. Chances are it's jealousy, paranoia, or a good old-fashioned power play.

Although messenger Mercury ended its retrograde on Monday, October 18, any confusion or miscommunication — particularly within partnerships — that happened over the last three weeks could be front and center during this intense full moon. But Pluto's job is to burn down whatever's no longer serving us in order to rebuild, and Mars has us ready to plow ahead, so chances are, anything difficult that arises now might feel very heavy in the moment but could be dealt with relatively quickly.

Who the Aries Full Moon Will Affect the Most

If you were born under the sign of the Ram — approximately March 21 to April 19 — or with your personal planets (the sun, moon, Mercury, Venus, or Mars) in Aries (something you can learn from your natal chart), you'll feel this full moon more than most. More specifically, if you have a personal planet that falls within five degrees of the new moon (27 degrees Aries), you could feel a blast of assertive energy that would be ideally channeled into pushing forward on big-picture goals as opposed to clashing with others in an attempt to come out on top.

Your Big 3: What to Know About Your Sun, Moon, and Rising Sign

Every month, no matter what sign a full moon falls in, they're fertile ground for emotional outbursts and loads of drama. And when the transit occurs in a passionate, impulsive, aggressive sign like Aries, the days around the full moon could feel like… a lot. You could find yourself in the midst of outbursts and conflicts you never saw coming. But it also has the potential to charge up empowered moves that push you further down the road to turning an ambitious dream into reality. In short, the intensity — and potential impulsivity — radiating around this event is a case for doing your best to stay grounded and mindful.

As the first sign of the zodiac — the "baby" of all 12 signs — Aries' instinct is to answer to themselves first and foremost. For those of us who are lifelong people pleasers, there's a lot to learn from the fire sign. But as Libra season teaches, you do best when your relationships — including the one you have with yourself — are in balance. The Sabian symbol (a system shared by a clairvoyant named Elsie Wheeler that illustrates the meaning of each degree of the zodiac) for the exact spot in Aries where the full moon occurs is "A Large Audience Confronts The Performer Who Disappointed Its Expectations." In other words, as long as you face this full moon with a commitment to stay true to both yourself and to others, you'll have a greater shot at coming out on top. 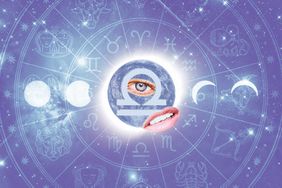 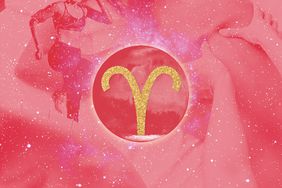