With a holiday shopping list longer than a CVS receipt, you deserve to snatch up a thing (or two…or three…) for yourself. Enter: this month’s must-reads.

Ready some really kick*ss news? 2020 is almost over. I repeat, dear readers: 2020 is almost over. And given how challenging the year has been, why wait until January to start anew? You deserve a fresh start, stat — and these new December reads can help you do just that. Ahead, four titles, all written by women, that aim to better your body and mind.

If the name Jen Sincero sounds familiar that's because it likely is — especially given the success (and striking taxi cab-yellow cover) of her 2013 New York Times bestseller, 'You Are a Badass'. Seven years and two more books later, she's back with the newest addition to her You Are a Badass series: Badass Habits. In her latest quick-witted work, Sincero tackles all things habit: how they form, how to bust the pesky ones, and how to make new ones stick using a 21-day-plan of Sincero's own design. And in the process, she helps readers become more self-aware and attuned to their boundaries and desires.

The first step to forming healthy habits, according to Sincero: establishing healthy boundaries, which define "where you end and the outside world begins." Of course, Sincero doesn't leave you to figure all that out on your own. Rather, she offers a digestible guide to owning your actions, emotions, and needs without absorbing everyone else's. "You are responsible to other people. You are not responsible for other people. Big diff," she writes. After a quick breakdown of how to take inventory of your habits (which is essential prior to adopting more), the author spends most of the book shepherding readers through her 21-day plan to ultimately make a new habit stick. Her daily exercises include creating a mantra for why you want this new habit to stick, tracking progress, rewarding yourself, and surrounding yourself with the right energy.

Badass Habits is a step-by-step instruction manual to help you get to the root of the tendencies that make you you, kick the bad ones, and develop better ones. Sure, this could mean flossing daily or eating more greens, but Sincero also encourages adopting more holistic better-for-you behaviors, such as being kinder to a work frenemy, calling your grandma daily, or following a yoga flow every a.m.

In this collection of essays, journalist Kenya Hunt shares an intimate look into her life as an African American in London and her career as a Black fashion editor in an era where Black women are more visible than ever before. And yet with every monumental magazine cover, every political glass ceiling shattered, every record smashed, the reality of life as a Black woman continues to be a complex, conflicted experience — and Hunt's honest narrative demonstrates that.

The debut author invites readers to tag along as she attends the London premiere of Black Panther, wakes up to the news that white supremacists demonstrated on her alma mater's campus, and finds herself speaking as the African American female perspective when British cab drivers want to talk politics. She sheds a light on the casual racism (or "Black paranoia") of white AirBnb hosts, exposes the shoddy conditions of a hospital in a low-income neighborhood where she has a miscarriage, and traces the evolution of the word "woke." In the process, Hunt reveals that she's spent most of her life under pressure to be exceptional while feeling like an outsider, whether as the only African American in a room full of Brits or a newcomer to the fashion industry. It's with her Black friends and colleagues — her "girls" — that she finds true community.

In addition to her own writing, Hunt turns to her friends for additional essays that help further explore a range of ever-important topics, including (but not limited to) racism, police brutality, Black motherhood, and inclusive feminism. From the first page to the very last, Hunt's message is clear: The rise of Black women is no trend, and even amongst *all* of #BlackGirlMagic, there is still work to be done.

The Book of Moods by Lauren Martin

If there's one thing romantic comedies get right, it's that fights do happen in relationships — and they often result in one party stomping away, be it for a walk or a drink. For the founder of the Words of Women blog, Lauren Martin, it was the latter.

Rewind five years: Following a pointless argument with her boyfriend, Martin — who felt like she couldn't stop "lashing out" and "ruining things" despite having "gotten everything [she'd] wanted" — headed to a bar. There, she started talking to a stranger, who revealed that she too felt "annoyed, irritable, and tense even though life was good." Upon hearing that, a flip switched in Martin. But this time, it didn't lead her to fly off the handle. Instead, she decided to make a change and start "figuring out these moods that ran through [her]."

Over the next few years, Martin worked to understand the emotions behind her varying (frequently destructive) moods and to retrain her brain to avoid these states altogether. Sounds easier said than done, right? Right — and Martin knows that firsthand. In addition to sharing her own struggles with anxiety, angst, and self-doubt, Martin calls upon clinical studies and stories from inspiring women (i.e. Audrey Hepburn, Princess Diana) to offer readers tangible tools for navigating their own whirlwind of emotions. Think of her book as a series of tried-and-true tactics for practicing self-care and emotional stability. That said, all of these anecdotes (and most of the quotes interspersed throughout) feature white women, and some of Martin's "moods" can read a bit more like tantrums.

As identical twins, Lindsay and Lexie Kite, Ph.D.s, know a thing (or two...or three...) about, in their words, "having their bodies and faces enthusiastically ogled, scanned, and compared." They've also done extensive research on body image, founded the nonprofit Beauty Redefined, and, oh yeah, they're women. From a young age, women and female-identifying people are bombarded by messages about their bodies and, in turn, learn to objectify themselves just as their beauty-obsessed society does to them. Enter: the Kites.

Building off the growing body neutrality and body acceptance movements, the sisters set out to show readers exactly how to reframe their relationship with their bodies and, in doing so, break free of self-objectification. More Than a Body covers how to develop healthier media habits to avoid negative and triggering images, dismantle the notion that being healthy equals being a certain "goal" weight, and effectively reconnect with your "whole self." Focusing on how you feel and what you can do will get you much further than simply focusing on your weight, size, shape, appearance, the Kites argue. In the process, you'll start to see your body as a tool and not an object.

This Chelsea Clinton–endorsed book is an in-depth guide to understanding why women are conditioned to struggle with body image and how to become resilient in the face of objectification — both of which aren't all that easy. But the Kites encourage the challenge. Why? Because "pain and discomfort are actually required to access body image resilience because our 'comfort zones' do not demand our improvement or growth." Preach.

Was this page helpful?
Thanks for your feedback!
Tell us why!
Related Articles
The Best New Wellness Books Hitting Shelves In January
What to Read, Watch, Listen to, and Learn from This Juneteenth
Tap Into Your Kinks with This New Book of Sexy Stories 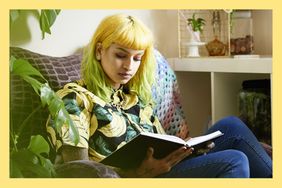 The Best Self-Growth Books for Changing Your Life and Perspective