How To Stay on an Even Keel

- Exercise regularly. Physical activity prompts the body to produce those feel-good neurotransmitters called endorphins and boosts serotonin levels to improve mood naturally. Research shows that exercise -- both aerobic and strength training -- can reduce and prevent depression and improve PMS symptoms. Currently, most experts recommend getting 30 minutes of moderate-intensity activity most days of the week.

- Eat well. Many women eat too few calories and follow diets that are deficient in vitamins, minerals and protein. Others don't eat often enough, so their blood sugar level is unsteady. Either way, when your brain is in a fuel-deprived state, it is more sensitive to stress, says Sarah Berga, M.D., of the University of Pittsburgh School of Medicine. Eating five to six small meals a day that contain a good mix of carbohydrates -- which can raise serotonin levels -- and protein may smooth out rough emotional edges.

- Take calcium supplements. Research by Susan Thys-Jacobs, M.D., of St. Luke's-Roosevelt Hospital in New York City, found that taking 1,200 milligrams of calcium carbonate daily reduces PMS symptoms by 48 percent. There is also some evidence that taking 200-400 mg of magnesium may be helpful. Less proof exists to verify that vitamin B6 and herbal remedies such as evening primrose oil work for PMS, but they may be worth a try.

- Seek treatment. The good news about hormonally related mood disorders -- depression, anxiety and severe PMS -- is that they are treatable once they are diagnosed. The drugs most commonly prescribed for these disorders are the selective serotonin reuptake inhibitors (SSRIs), such as Prozac (renamed Sarafem for severe PMS sufferers), Zoloft, Paxil and Effexor, which make more serotonin available in the brain.

"These drugs work for about two-thirds of women with severe PMS -- and within a week or two," says Peter Schmidt, M.D., of the National Institute of Mental Health, "vs. the four to six weeks they take to relieve depression." To reduce potential side effects and ward off the development of a tolerance to these drugs, some physicians prescribe them for use during only the last two weeks of the menstrual cycle.

Studies show that SSRIs can even be used during and after pregnancy (and while breast-feeding) if a woman is severely depressed or suicidal. There is also limited evidence to suggest that oral progesterone may help to quell certain PMS mood symptoms, such as worrying. 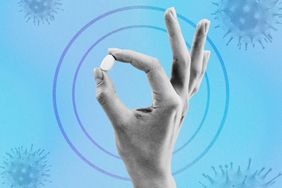 The 10 Best Natural Sleep Aids, According to Customer Reviews
What Is Magnesium Good for, Exactly?