It's fairly complicated but worth learning if you want to be a good ally.

When you're outside of the identities of heterosexual, white, and cisgender, the idea of defining your identity may seem alien. That's because these identities are seen as a default; anyone outside those identities is seen as "other." As someone outside of that realm, it took me almost twenty years to understand my identity — and that it will continue to evolve.

Growing up, I knew I was neither Black nor white; I was not "Spanish" as my mother called us, as people of Puerto Rican and Cuban descent. I was not straight, and my bisexuality was challenged as an adolescent. But once I discovered the term Afro-Latina, the world seemed to align and make more sense to me.

I had it relatively easy in that respect. Such is not the case for everyone. Language is used as a tool to communicate and define; it helps you figure out who you are, and gives you perspective on the world around you. While labels can be somewhat exclusionary, when you finally find a label you identify with, it can help you find your community, increase a sense of belonging, and feel empowered, Della V. Mosley, Ph.D., assistant professor of psychology at the University of Florida previously told Shape. For me, when I discovered the right label, I felt seen. I found my place inthe larger world.

This collective quest for belonging and inclusion — for ourselves and others — is why language matures. This is why we have the "x."

The debate over the "x" in terms such as "Latinx," "folx," and "womxn" are aplenty, and they may leave you with a lot of questions: "Is the "x" really more inclusive? How do you pronounce these words? Why is it even there? Do we all have to start using these terms?" Take a deep breath. Let's talk about it.

Why Use the X

To put it simply, "including the letter 'x' in the spellings of these traditional terms aims to reflect the fluid boxes of gender identity and signify the inclusion of all groups, including trans people and people of color," says Erika De La Cruz, TV host and author of Passionistas: Tips, Tales and Tweetables from Women Pursuing Their Dreams. Womxn, folx, and Latinx are all used to acknowledge the shortcomings of gender-binary language (meaning, limited to male or female).

But gender is just one piece of the puzzle; colonization also plays a big role as well. Western colonization has historically suppressed cultures that were different. Now, some people seek to amend language (English, and otherwise) to address that fact and pay homage to these cultures.

Overall, research around the usage of "x" in language shows that there are generally five reasons it's used, says Norma Mendoza-Denton, Ph.D., linguistics expert and anthropology professor at UCLA.

All of these reasons reference the desire to escape binary language as well as colonization. In reclaiming language, it's easier to pave the way for a more inclusive system.

So What Do Latinx, Womxn, and Folx Mean?

While these three words, specifically, are garnering a lot of attention and being used more frequently, they're not the only words out there using the "x" — and many more may evolve as this becomes a more common practice.

Spanish and other Romance languages are binary by nature; for example, in Spanish, the masculine el/un/o is often used as a default for all genders, where the feminine ella/una/a is only used to address women and femmes. Many adjectives often end in -o or -a to denote the gender of the person they're referencing.

Thus, people who identify outside of the gender binary can find themselves conflicted or misgenderedwith everyday words, such as adjectives, in these languages — or, especially, in the label of Latino/a to describe a person of Latin American origin or descent. Other languages such as German and English have neutral terms, hence why we've been able to use "they" in English as a workaround for gendered pronouns.

So why change the "a" in the word woman? The term "womxn" is often used to remove the "man" from woman. This de-centers the idea that women come from men. It also emphasizes the intention to include trans and non-binary women/femmes, acknowledging that not all women have vaginas and not all people with vaginas are womxn.

The word womxn is often used to disrupt colonial assumptions around gender as well. For example, Indigenous and African societies often didn'tsee gender roles and genders the same way that European societies have. Many African and Indigenous tribes were matrilineal and/or matrilocal, meaning structure around familial units was based on the mother's lineage as opposed to the father's. Two-spirit individuals (a distinct, third gender) were often recognized in Native American tribes, although each tribe may have their own terminology or identification for the term. When European colonizers took Indigenous lands by force and enslaved Africans, they also suppressed and criminalized many cultural ways of life. The patriarchal, white supremacist society we live in today was thrust upon many people, which is why changing the language we now use is a form of reclamation.

While the word folks is already gender-neutral, the term "folx" is used to specifically display inclusion of gender-queer, transgender and agender folks. While the original "folks" doesn't inherently exclude anyone, using the "x" can signal that you're aware of people who might identify outside the binary.

How and When Should I Use It?

It depends on the situation. To be safe, it's wise to use the "x" when referring to greater communities to make sure you're including everyone. If you're in radical, feminist, or queer spaces (whether online or IRL), it's a good idea to use the term "womxn" or "folx" to signify that you respect the space. "Queering" up your language, so-to-speak, is a great way to be inclusive.

If you identify as Latina or a woman, should you change how you self-identify? "This is a common question and, frankly, a concern for those who love their identities 'as is,'" says De La Cruz. "I believe we need to recognize that each person within our culture has undergone their own journey to accept themselves."

Meaning, it's 100-percent fine to be true to who you are, even if that's a label within the binary. For example, I still consider myself an Afro-Latina because that is how I identify. However, if I'm addressing the entire Latinx community, I will say "Latinx" instead.

How do you pronounce words with an "x"? Womxn is pronounced such as "woman" or "women" depending on the context; folx is plural, pronounced like "folks"; Latinx is pronounced "La-teen-x" or "Lah-tin-x," according to Medoza-Denton.

Is This How I Can Be a Good Ally?

There are simple things you can do in order to be a better ally, but just doing these things won't automatically make you an ally. Being an ally is all about consistently making an effort to assist the movement of eradicating marginalization. (

Add your pronouns to your social media pages and your email signatures — even if you don't identify as transgender or gender non-conforming. This helps normalize the asking of pronouns in daily interaction. Add "they" to your vocabulary to reference people who have not confirmed their pronouns. (Or, when in doubt, just ask people what they prefer! Remember that there's no one way to "look" trans, gender non-conforming, or non-binary. Everyone is different.) If you're concerned about how grammatically correct the usage of "they" is, let me introduce you to the APA Style Guide.

And, to be frank, "correct" language is a sham. When different groups of people in different places all speak a language differently, how can you deem one version "right" or "correct"? Reinforcing this idea is restrictive to those who live outside the margins of "proper English," such as speakers of African-American Vernacular English (AAVE) or alternative vernaculars. Mendoza-Denton says it best: "Language has always and will always continue to evolve! Don't worry, Generation C, 30 years into the future will be using some new terms that have not yet been invented and will be blowing our minds!" 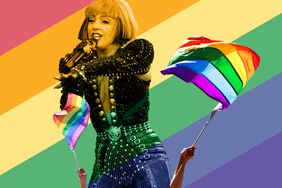 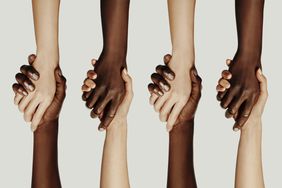 Meet FOLX, the TeleHealth Platform Made By Queer People for Queer People
How to Identify Your Feelings with a Wheel of Emotions — and Why You Should 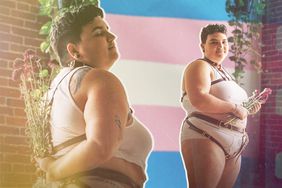