You may think you already know the signs of diabetes: You're thirsty all the time, you feel exhausted 24/7 and/or you're constantly running to the bathroom. Yet a surprising number of Americans -- including young and seemingly healthy women -- have abnormally high blood-sugar (glucose) levels but don't know it. The signs can be so subtle -- or altogether absent -- that the problem goes undetected, yet it increases the risk for heart disease and other serious health problems. As more and more of us pack on extra pounds, the incidence of diabetes and its recently defined precursor, pre-diabetes, is soaring in the United States. In fact, new research from the Centers for Disease Control and Prevention suggests that more than one in three girls born in the year 2000 will develop diabetes during their lifetime.

Approximately 18 million Americans have diabetes, either type 1 -- in which the pancreas doesn't produce enough insulin (a hormone that helps regulate blood sugar) -- or type 2, a far more common condition that develops over time in which the body cannot use insulin effectively to maintain normal blood-sugar levels. Unfortunately, about 5 million of these diabetics are unaware they have the condition, according to the American Diabetes Association (ADA).

What's even more worrisome is that more than 24 million additional Americans have pre-diabetes, in which a person's blood-sugar levels are higher than normal, but not quite high enough to be classified as diabetic. Research has found that the majority of people with pre-diabetes develop type 2 diabetes within 10 years, notes Francine Kaufman, M.D., immediate past president of the ADA and an endocrinologist at Childrens Hospital Los Angeles. More alarming, pre-diabetes, by itself, carries a 50 percent increased risk of cardiovascular disease. Yet, because it doesn't cause symptoms, most people who have it are blissfully unaware of the danger.

The good news is that there is a lot you can do now to lower your risk of developing both pre-diabetes and type 2 diabetes. The latest research suggests that more than half of new cases of diabetes could be prevented through lifestyle changes. Here are six steps that can greatly reduce your odds.

1. Lose excess weight. Extra body fat prevents insulin from working properly in the body, thereby laying the groundwork for type 2 diabetes -- sometimes as early as childhood. In fact, being overweight or obese is the biggest risk factor for type 2 diabetes. "Abdominal obesity seems to be worse than the pear-shaped pattern," notes Eugene Barrett, M.D., president of the ADA and a professor of internal medicine at the University of Virginia in Charlottesville. "The fat that's contained within the abdominal cavity gets broken down into fatty acids, is released more easily into the bloodstream and interferes with the way insulin works." For most overweight and obese people, losing as little as 7 percent of their current body weight would substantially lower their risk of developing diabetes, says Carole Mensing, R.N., coordinator of the diabetes education program at the University of Connecticut Health Center in Farmington.

2. Swap carbohydrates. It's smart to cut back on your overall intake of refined carbs such as cookies, cake and the like because they raise blood sugar, which can make you eat more, Mensing says. At the same time, increase the amount of fiber-rich whole grains, fruits, nuts, legumes and vegetables you eat, recommends JoAnn Manson, M.D., chief of preventive medicine at Harvard's Brigham and Women's Hospital in Boston. A recent study at the University of Helsinki in Finland found that a reasonably high intake of dietary fiber -- the median intake for women in the study was 17 grams a day and included both the soluble and insoluble kinds -- seems to increase the body's ability to respond to and use insulin, and may help prevent type 2 diabetes. Aim to get 25 grams daily from a variety of foods.

3. Cut back on fat. Particularly harmful fats include saturated fat, cholesterol and trans fatty acids; research has found that all of these can increase insulin resistance, in which the body doesn't use insulin efficiently. Better sources of fat: Polyunsaturated or monounsaturated fats -- found in seafood and vegetable oils, respectively -- are associated with a lower risk of developing diabetes. Even if you trade bad fats for good ones, keep an eye on your overall intake. In a study at the University of Auckland in New Zealand, researchers found that when people who had blood-sugar abnormalities reduced their total fat intake by 34 grams per day, their ability to metabolize carbohydrates (what's called glucose tolerance) improved, and a lower percentage developed type 2 diabetes a year later than those who didn't slash fat. Total fat intake should hover around 25-30 percent of your daily calories.

4. Exercise regularly. "Data suggest that even 30-40 minutes of brisk walking, five times a week, can decrease your risk by up to 40 percent," says Robert A. Rizza, M.D., a professor of medicine in the division of endocrinology, diabetes, metabolism and nutrition at the Mayo Clinic in Rochester, Minn. Add weight loss to the equation and your risk drops even further: Research at the National Institute of Diabetes and Digestive and Kidney Diseases found that when overweight people lost 7-10 percent of their body weight and began taking half-hour walks five days a week, they cut their odds of developing diabetes by 58 percent. It's not just a matter of slimming down, though: "Exercise itself works very well to decrease insulin resistance," Eugene Barrett explains. "If you exercise a muscle, this will cause the muscle to take sugar out of the bloodstream and use it, which causes blood-sugar levels to decline." And it's likely that the lower your blood-sugar levels, the lower your risk for heart disease.

5. Watch your alcohol intake. Among healthy women, moderate drinking (defined as about a glass and a half of wine per day) may reduce the risk of developing type 2 diabetes, according to a recent study at Karolinska Institute in Stockholm, Sweden. More than that, however, appears to increase the risk in lean women, though not in those who are overweight. "Because the research has been mixed as far as alcohol goes, it's important not to overindulge," Carole Mensing says. "If you do drink, have food with your alcohol. Abstain if you're starting medication for diabetes or pre-diabetes, or if you have a strong family history of diabetes."

6. Have your blood-sugar level tested. Fasting blood sugar (a measure of your blood-sugar level after you haven't eaten for eight to 12 hours) is considered normal if below 100 milligrams per deciliter, but a person with pre-diabetes has a fasting blood-sugar level between 100 and 125 mg/dl, and someone with full-fledged diabetes has blood sugar measuring 126 mg/dl or above. "If you have pre-diabetes, you need to know so you can take steps to prevent full-blown diabetes," Kaufman explains. "The pre-diabetic condition can be reversed, and people can go back to normal blood-sugar status. Once you get diabetes, however, reversing it is a lot harder." 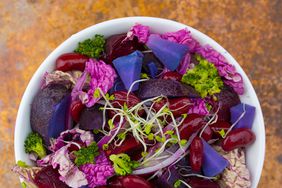