Popcorn lung is scarier than it sounds, and there's a chance you can get it from JUUL.

The explosion of JUUL's popularity is just one part of the rise of e-cigarettes, particularly among American teens. But with the resurgence of smoking—even in "e" form—comes the rise of vaping-related illness.

There have been more than 1,600 cases of vaping-related illnesses and at least 39 confirmed deaths, according to the Centers for Disease Control and Prevention (CDC), says registered nurse Judy Lenane, R.N., M.H.A., and as a result, medical professionals have been on high alert. It's bordering a health crisis, as the CDC reports an "outbreak of lung injury". (More on that to come.)

One buzzword surrounding the dangers of vaping has been catching on and causing concern: popcorn lung. But is popcorn lung a vaping-related illness? Do e-cigarettes cause popcorn lung? What is popcorn lung, anyway? Ahead, pulmonologists, pathologists, and thoracic surgeons explain this disease and how a vape pen can contribute to declining lung health.

What Is Popcorn Lung?

Popcorn lung is referred to by doctors as a "lung injury", but its medical name is actually "bronchiolitis obliterans". It's an inflammatory condition that affects the lung's tiniest airways (the bronchioles), which may become damaged and inflamed, leading to extensive scarring that blocks the airways, according to the Genetic and Rare Diseases Information Center. And while the name seems lighthearted, it can have a deadly outcome. (More here: Are E-Cigarettes Really That Bad for You?)

Why popcorn? "Popcorn lung is an injury from inhalation of chemicals specific to the popcorn making process," says Linda Barr, M.D. pulmonologist at the University of Maryland St. Joseph Medical Center.

The terminology came into use decades ago, when "workers at a popcorn factory were exposed to a chemical called diacetyl that is used in food flavoring, and developed bronchiolitis obliterans," according to Michael Vercillo, M.D., thoracic surgeon at Advocate Lutheran General Hospital.

"The onset of symptoms can be over weeks to months, and can become progressively worse," says Dr. Vercillo. Here are the most common symptoms of popcorn lung, according to Melodi Pirzada, M.D., chief of Pediatric Pulmonology at NYU Winthrop Hospital:

What sets this apart from your average cough or from, say, bronchitis? The hallmark of these symptoms is that they do not improve with typical lung treatments such as inhalers or steroids, says Dr. Vercillo. "This is because larger airways respond to inhalers, but this disease affects the smaller airways," he explains. "They also typically do not respond to treatment with steroids, like many other lung diseases and injuries," he says. Steroids reduce swelling and inflammation, which would—with other diseases—open up the airways and allow for easier breathing. If the airways have been thickened and scarred enough (as is the case with bronchiolitis obliterans), steroids may not be able to open up those airways, as you're not dealing with just inflammation at that point.

What's the Prognosis for Popcorn Lung?

The effects of popcorn lung are permanent and can be fatal if exposure to the irritant (ex: the vape chemicals, but more on that below) continues. "Once you get popcorn lung, there's no treatment or cure," says Dr. Pirzada. "The lungs are scarred for life—the outcome is not good. If severe, a patient's only hope for a cure is having a lung transplant."

Dr. Vercillo noted that, because there's little response to treatment, the prognosis is generally poor. "It can lead to a rapid decline in lung function," he says. "The best treatment is to remove exposure to the irritant."

Once a patient has popcorn lung, other problems may occur, including "frequent pneumonia, or problems associated with lower oxygen levels, such as high blood pressure, heart disease, or kidney disease," says Dr. Vercillo.

Can You Get Popcorn Lung from Vaping?

There's a chance, that's for sure. How common it is...is still to be determined. However, it can happen.

"Vaping may cause popcorn lung," says Dr. Pirzada. "Diacetyl is present in buttery vaping flavors—the same chemical used to give a buttery taste to food products like popcorn—and it's the main chemical responsible for this disease," she says. "Even though the amounts in e-cigs may be small, when a person vapes, the chemical goes directly into the lungs, compared to ingesting diacetyl and having it go through the digestive system and enzymatic changes before entering the bloodstream."

Side bar: It's important to note the difference between inhaling and ingesting diacetyl. Diacetyl is naturally occurring in some foods and generally recognized as safe by the FDA. However, vapors of diacetyl are different, and inhalation is what's been associated with the disease. The same goes for vitamin E acetate, a common e-cig additive, which the CDC warned about as well; OK to ingest, not a good idea to inhale.

"It's postulated that vaping-associated lung changes were caused by vape flavorings, similar to patients with more traditional popcorn lung disease," says board-certified pathologist Timothy C. Allen, M.D., J.D., governor at the College of American Pathologists. While the hypothesis is not implausible, it hasn't yet been supported by any lung tissue biopsy studies with patients who vape, he says.

What about all the vaping illness and death you've been hearing about? It's not popcorn lung, says Dr. Barr. "Most of the reported radiologic patterns associated with vaping-related respiratory failures and the main pathologies reported do not look like bronchiolitis obliterans [aka popcorn lung]."

"We've learned a lot very recently about vaping-related lung disease, and as it turns out, popcorn lung does not appear to be a typical type of lung injury related to vaping," says Dr. Allen.

It's also likely that, if you vape, you'll get a different kind of lung problem. (Here's a complete list of the health risks and dangers of vaping.)

"The most recent data points show vaping leads to a different type of chemical pneumonitis, meaning a different type of injury to the lung from the inhalation of chemicals," says Robert Y. Goldberg, M.D., a pulmonologist with Mission Hospital in Orange County, California. "The current thought is that this is caused by vitamin E acetate. Though both are lung injuries caused by inhalation of chemicals, they're separate processes."

There is a growing concern from the CDC about vitamin E acetate, so be on the lookout for that as an ingredient (or just avoid e-cigarettes entirely).

Vaping-Associated Lung Injury (the Disease You Might Get from Vaping)

The disease referenced by Dr. Goldberg has recently been recognized by the CDC as "e-cigarette or vaping-associated lung injury (EVALI)," and as he put it, "is not truly popcorn lung," but may have some similar symptoms.

It's tough to say what exactly EVALI is, at least not right now. The cases are characterized by pneumonitis (inflammation of the walls of the lung's tiny air sacs), but there's no exact definition of EVALI just yet, and "no specific test or marker exists for its diagnosis," according to the CDC. The Nationa Institutes of Health (NIH) also report that "behavioral, chemical, device-related, and biological causes remain unclear," and that "no clear common pathogenesis that has been discovered."

That said, physicians inquire about a patient's history with e-cigarettes when they do an evaluation. Here are some symptoms doctors are looking for:

Why You Cough After a Really Tough Workout

And he's not being dramatic; there's been a "remarkable and sudden upsurge in vaping-associated lung injury cases, some of which have resulted in death," says Dr. Allen.

In fact, "two medical articles by highly respected lung pathologists have shown, independently, similar findings of lung injury based on the examination of lung tissue biopsies from people who had a history of vaping, several of whom had a history of vaping marijuana or cannabis oils." But these weren't patients with popcorn lung. "Both teams of lung pathologists showed biopsies containing 'acute lung injury,' including 'diffuse alveolar damage' and 'organizing pneumonia.'" (Not to mention, the nicotine in e-cigs like Juul is super addictive and very hard to quit.)

Are Some Vapes Safer Than Others?

It's unclear, but as of now, not really. "Since the exact cause of the lung injury is not 100-percent known, we cannot say for sure whether some vapes are safer than others," says Dr. Goldberg. "The majority of the devices that led to lung injury were after- or black-market devices, though even normal commercial devices have caused injury," he says. "These devices and their ingredients have not been fully evaluated by the FDA, therefore, no device can be recommended as safe."

But what about vaping CBD or cannabis? Again—these are not evaluated by the FDA, so many doctors don't feel comfortable claiming any sort of safety. Generally, these are safer than nicotine, says Jordan Tishler, M.D., but at the moment, there are lots of tainted cannabis products causing acute injury, too. "So, I'd advise avoiding cannabis or CBD oil pens," he says.

As for diacetyl and the potential popcorn lung situation, there's some good news: "In 2015, a Harvard study found that 75 percent of vape liquids tested contained diacetyl. More recently, most producers of vape liquid are reported to not contain diacetyl," says Dr. Vercillo. "That being said, there are still vape liquids that contain diacetyl. The best way to know if it is present is to look for companies that use professional lab testing or independent lab reports listing ingredients in the vape liquid."

But, remember: EVALI is the main vaping risk that we currently know about, and "diacetyl is not the chemical compound responsible for that," says Dr. Goldberg. "At this point, we don't know which vaping devices have vitamin E acetate, which is being seen as the culprit in EVALI. Since we don't know which devices have this chemical or why, no vaping devices can be considered safe." 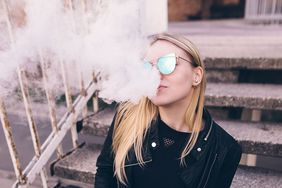 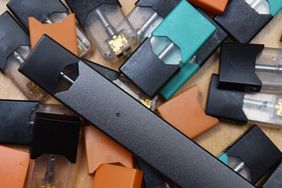 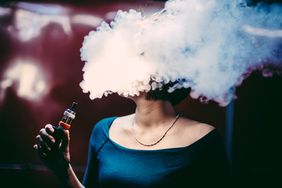 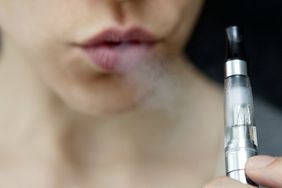 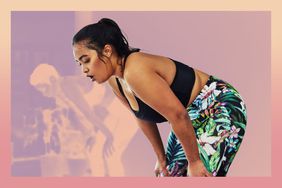 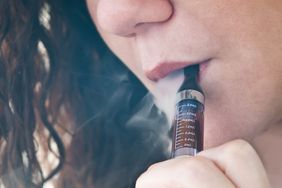 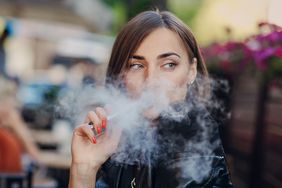 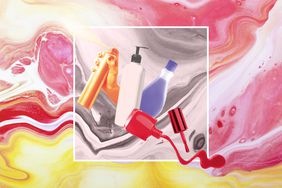