In March 2018, a U.K. man had the first-ever global case of gonorrhea that's resistant to both first-choice antibiotic treatments.

A scary fact: STDs have been on the rise since 2014, despite all the awareness surrounding the importance of safe sex. Modern medicine has made most STDs treatable, but if that STD starts evolving faster than our treatments, then there's trouble.

Health officials have been warning us about the threat of "super gonorrhea"—a strain of the sexually transmitted disease that's resistant to all known antibiotics—for a few years now. But the superbug is no longer a future problem. It's right here, right now.

In March 2018, a U.K. man reportedly contracted multidrug-resistant super gonorrhea, marking the first-ever global case of an infection with high-level resistance to the standard treatment of the disease, according to Public Health England. The man seemed to have picked up the STD in Southeast Asia earlier in 2018 and started showing symptoms after about a month, according to the report. The first-line (or standard) treatment for gonorrhea is a combination of two antibiotics: azithromycin and ceftriaxone. This particular infection is the first-ever global case of gonorrhea that's showed high-level resistance to both drugs.

This isn't the first super-STD scare that's surfaced IRL: In 2016, the Centers for Disease Control and Prevention announced a cluster of gonorrhea infections that demonstrated both decreased susceptibility to ceftriaxone and very high-level resistance to azithromycin. That was the first time this superbug had been found in the U.S.

"Our last line of defense against gonorrhea is weakening," said Jonathan Mermin, M.D., director of CDC's National Center for HIV/AIDS, Viral Hepatitis, STD, and TB Prevention. "If resistance continues to increase and spread, current treatment will ultimately fail and 800,000 Americans a year will be at risk for untreatable gonorrhea."

This is especially concerning as rates of gonorrhea, along with chlamydia, are at "epidemic proportions," with these diseases accounting for the highest number of cases of any infectious disease in the U.S., the CDC said. (And guess what? Chlamydia might soon be antibiotic-resistant too!) The disease is spreading so quickly partly because it shows few if any symptoms at the beginning, so people may give it to partners without even realizing they have it. Another factor is how it spreads. It can be transmitted through all types of sexual contact, so while people may remember to use a condom for "standard" sex, many people don't use protection for other types of sex-which is why people who have the most oral sex, including gay men, women, and anyone under age 29, are at the highest risk and account for the vast majority of gonorrhea cases.

Because of super gonorrhea and other complications of STDs, unsafe sex is the number-one risk factor for illness and death in young women worldwide. Fortunately, there are ways to protect yourself. Safe sex is an absolute must for everyone, the CDC says.

In the meantime, the CDC added that an experimental oral antibiotic currently in testing is showing promising results. 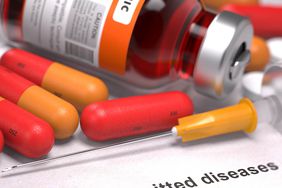